9 DeKalb Avenue (originally referred to as 340 Flatbush Avenue Extension) is an under-construction supertall residential skyscraper in Downtown Brooklyn, New York City by Michael Stern's JDS Development Group. When completed it will become the tallest structure in New York City outside Manhattan, as well as the first supertall building in Brooklyn.

The structure will be in Downtown Brooklyn and will be several blocks away from the former tallest buildings in Brooklyn, AVA DoBro and 388 Bridge Street. Both were surpassed by The Hub in 2017. If built as planned, the building will be slightly under twice the height of Avalon and 388 Bridge. The building will be adjacent to other tall mixed-use developments, such as the three towers of City Point.

The mixed-use skyscraper will incorporate the Dime Savings Bank building, designed by Mowbray and Uffinger, at its base. The bank was designed in the Classical Revival style. The interior of the bank building is "remarkable" and features large gilded Mercury-head dimes and twelve red marble columns supporting the rotunda; these were added in the 1931-32 expansion. The bank building was designated a New York City Landmark on July 19, 1994.

9 DeKalb Avenue's tower is clad in stone, bronze, and stainless steel. The designer, SHoP Architects, has stated that the firm took inspiration from the design of the Dime Savings Bank Building, with the building's vertical features mirroring the bank's columns.

9 DeKalb Avenue will include approximately 150 condominiums and 425 apartments, and the residences will encompass roughly 466,000 square feet (43,300 m2). There will be 140,000 square feet (13,000 m2) of commercial space, and the Dime Savings Bank will be converted to upscale retail and possibly an entrance to the new building. The fifth floor will include an outdoor terrace. The residential units are planned to be rental properties, and developers applied for tax breaks through the state's 421-a tax exemption program in 2015, prior to that program's expiration, which would require dedicating at least twenty percent of the building's units as affordable housing.

The Dime Savings Bank Building at 9 DeKalb Avenue was built in 1906-08 and was designed by Mowbray and Uffinger. It was significantly enlarged by Halsey, McCormack and Helmer in 1931-32. It was later owned by J.P. Morgan Chase and was used as a bank branch. In 2004, the New York City Department of City Planning approved a significant rezoning for portions of Downtown Brooklyn, which resulted in significant expansion of office space and ground-floor retail, such as those at City Point. The rezoning consists of "zoning map and zoning text changes, new public open spaces, pedestrian and transit improvements, urban renewal, [and] street mappings". The bank building was subsequently sold for $90 million, and was first placed on the market in late 2014. 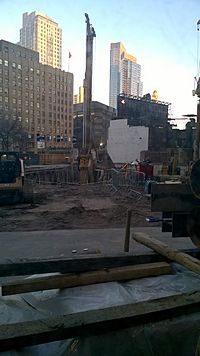 Piles being driven into the ground at the 9 Dekalb Avenue construction site on April 6, 2019

JDS and Joseph Chetrit's Chetrit Group finished acquiring the site in late 2015. The Dime Savings Bank of New York Originally, developers planned to acquire the building occupied by Junior's, a cheesecake restaurant, to use its air rights. However, Alan Rosen, the owner, turned down a $45 million buyout, as well as a later deal for less that would have set aside retail space in the new building for the restaurant.

Plans for the structure were first filed in mid-2014, calling for a seventy-story, 775 foot building, also designed by SHoP Architects. The building will mark the third collaboration between JDS and SHoP, after 111 West 57th Street and American Copper Buildings.

In December 2015, Fortress Investment Group provided a $115 million loan to JDS and Chetrit Group for the purchase of the site and for the refinancing of debt associated with the Dime Bank property. In early 2016, new plans were released with a slight height extension and reduced space for retail. Proposed modifications to the existing Dime Savings Bank structure were approved by New York City Landmarks Preservation Commission in April 2016, indicating support for the building's construction. Changes include the removal of non-original additions to the structure and repairing damage to the building's marble and copper.

In February 2017, Bank OZK and Melody Finance issued a $135 million bridge and pre-development loan for the project. The loan replaced Fortress's debt and previous funding from the Kushner Companies. JDS invested an additional $60 million in equity in August 2018 to purchase Chetrit's stake in the property, raising their ownership of the project to 100%. Construction began in mid-2018. In November 2018, Silverstein Properties' debt fund Silverstein Capital was reported to be nearing a $240 million mezzanine loan for the project, in addition to $400 million in additional debt from a senior lender. The loan closed in April 2019, along with $424.1 million in construction financing from Otéra Capital.

As of November 2020, construction was underway, and the concrete core had reached 28 stories.

All content from Kiddle encyclopedia articles (including the article images and facts) can be freely used under Attribution-ShareAlike license, unless stated otherwise. Cite this article:
9 DeKalb Avenue Facts for Kids. Kiddle Encyclopedia.