American Copper Buildings (originally known as 626 First Avenue) are a pair of residential skyscrapers in the Murray Hill neighborhood of Manhattan in New York City. The buildings were developed by JDS Development and Largo and was designed by SHoP Architects. The buildings are one of several major collaborations between JDS and SHoP; others include 111 West 57th Street, also in Manhattan, as well as 9 DeKalb Avenue in Brooklyn.

The site the two towers occupy was originally a 6.4-acre (2.6 ha) lot that hosted a Consolidated Edison power plant. When the lot was owned by Sheldon Solow, the plant was razed, and Solow paid to have the land cleaned. He later sold the plot to JDS and Largo in 2013 for $172 million. JDS and Largo secured a loan from Cornerstone Real Estate Advisors to purchase the land. Solow's plans for the site involved a seven-tower, $4 billion complex designed by Skidmore, Owings & Merrill. The SOM plan would also have included a park and a public school, as well as an adjacent public space designed by American architect Richard Meier. Solow later changed his plans to a twin-tower structure, which JDS and Largo preserved, although with a new architect. JDS executives were attracted to the lot in part due to nearby construction and activity associated with the United Nations and Langone Medical Center.

Construction began on the site in mid-2014, and the copper cladding was first applied in mid-2015. As of late 2015, the towers were nearly topped-out, and installation of the bridge between the two towers began in January 2016. A website for the project appeared in April 2016, and the name of the towers was changed from 626 First Avenue to the American Copper Buildings. In December 2016, the project received a $500 million senior mortgage from American International Group along with a $160 million mezzanine loan from Apollo Global Management and SL Green Realty.

The two separate structures did not open at the same time for renters, with the first opening in April 2017 and the other set to open in late 2018. A cafe called Hole in the Wall opened in the buildings' base in June 2019. 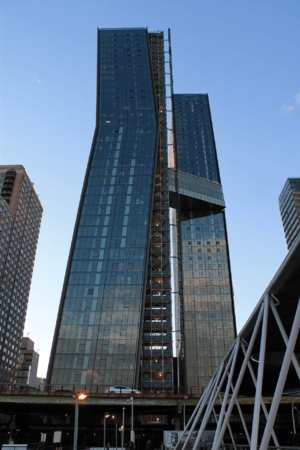 The exterior of the buildings is clad in copper. This metal cladding is similar to other SHoP-designed buildings, such as Barclay's Center. As of April 2016, the copper exterior has begun to patina, and the structures will eventually change color entirely. The two towers are designed such that they appear to "dance" with each other. They are also connected by a bridge approximately 300 feet from the ground, which will be three levels in height. The taller tower is 540 feet in height, and the shorter tower is 470 feet tall.

The two towers are connected by a skybridge which will include amenities for residents and mechanical equipment used by both towers. According to the developers, it is the first such bridge constructed in Manhattan in eighty years.

While the buildings’ parcel was for sale during Hurricane Sandy, rainfall turned an onsite pit into a "small lake". The buildings were therefore developed with precautions against floods and extreme weather caused by climate change. In the event of power loss caused by a storm, there are five emergency generators to power the buildings’ eight passenger and two freight elevators and to provide power to tenants’ refrigerators and a single outlet in each apartment for an indefinite period of time.

The buildings are residential, and include 761 rental units. Twenty percent of the units in the two towers are designated affordable, with the remaining eighty percent available at market.

The bridge connecting the development's two towers includes a pool and a lounge for residents. The buildings include a squash court and a gym with views of the East River. Other amenities are concentrated on the top of the east tower, with the top of the west tower reserved for mechanical space.

All content from Kiddle encyclopedia articles (including the article images and facts) can be freely used under Attribution-ShareAlike license, unless stated otherwise. Cite this article:
American Copper Buildings Facts for Kids. Kiddle Encyclopedia.