60 Wall Street is a 47-story, 745-foot-tall (227 m) skyscraper on Wall Street in the Financial District of Lower Manhattan, New York City. The tower was designed by Kevin Roche, John Dinkeloo & Associates to fit its surroundings with a postmodern, Greek revival, and neoclassical look to emphasize both height and size.

The site that is now 60 Wall Street was assembled from sites containing several buildings. After purchasing the site, the Bank of New York planned a $450 million, 1.6-million-square-foot (150,000 m2) office tower on the site, which was canceled. In September 1983, the bank sold the site to developer Park Tower Realty Company with plans for a 1.7-million-square-foot (160,000 m2), 60-story office tower. In September 1985, J.P. Morgan & Co. announced that they would purchase and fully occupy the proposed tower, and the project was finished in 1989. Since 2001, the building has served as the American headquarters of Deutsche Bank, which plans to leave the building for the Time Warner Center in 2021.

After purchasing the site, the Bank of New York planned a $450 million, 1.6-million-square-foot (150,000 m2) office tower on the site. However, the bank cancelled the plans after protests by New York State Senator Franz S. Leichter and New York City Councilwoman Ruth Messinger led the city's Industrial Commercial Incentive Board to refuse the company's request for a $22 million tax abatement in February 1982. By September 1982, the lots were up for sale, and in September 1983, the bank sold the site to developer Park Tower Realty Company with plans for a 1.7-million-square-foot (160,000 m2), 60-story office tower. In addition, Park Tower Realty purchased over 363,000 square feet (33,700 m2) of neighboring 55 Wall Street's air rights from Citibank. The project also received a bonus of 144,900 square feet (13,460 m2) for a covered pedestrian space, 16,038 square feet (1,490.0 m2) for arcade space on Wall and Pine Streets, and an allowance of 88,700 square feet (8,240 m2) for mechanical spaces. The developer initially planned for construction to begin in 1984 and be complete by 1986.

The New York City Landmarks Preservation Commission, which had designated 55 Wall Street as a landmark, needed to approve any major modifications regarding that building. In March 1984, the commission unanimously approved the transfer of the air rights from 55 Wall Street to the 60 Wall Street site. Shortly after, Manhattan Community Board 1 also unanimously approved the project in an advisory vote. By early 1985, the site was still vacant which Park Tower Realty blamed on the city's construction permitting process.

In September 1985, J.P. Morgan & Co. announced that they would purchase and fully occupy the proposed tower after earlier threatening to move the company's headquarters to Delaware. In May 1988, JPMorgan received $400 million in financing for the project from Dai-ichi Life. In addition to a 7% annual interest rate, the financing also gave Dai-ichi Life an oversight role in the management of the building and the option in 20 years to convert the debt into a 49% equity stake. 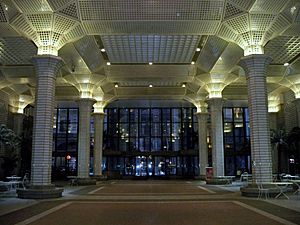 Atrium next to 60 Wall Street

After JPMorgan merged with Chase Manhattan Bank in 2000 to become JPMorgan Chase, the bank announced that it would move from 60 Wall Street to 277 Park Avenue, next to Chase Manhattan Bank's existing headquarters at 270 Park Avenue. Following the move, 60 Wall Street was sold to Deutsche Bank in 2001 for $600 million, with uncertain plans for the building. However, after the loss of the Deutsche Bank Building (also known as 130 Liberty Street) during the September 11 attacks, Deutsche Bank moved about 5,500 staff into the building. Deutsche Bank sold the building in a sale-and-leaseback agreement with Paramount Group for over $1.2 billion in 2007. In exchange, Deutsche Bank agreed to lease the entire building for 15 years, until 2022.

In 2016, Deutsche Bank hired Gensler to redesign the building's offices to create more collaborative and open space. In 2017, Paramount sold a 95% interest to GIC Singapore for $1.04 billion, valuing the tower at $1.1 billion. German lender Aareal Bank provided GIC with $575 million for the acquisition. In May 2018, Deutsche Bank announced the company would be vacating 60 Wall Street and moving to a smaller 1.1 million square foot office in the Time Warner Center, near Columbus Circle. The loss of Deutsche Bank will leave the building entirely vacant starting in the third quarter of 2021.

In July 2019, Deutsche Bank removed a triptych by German artist Gerhard Richter from the building's lobby. The work, valued at up to $30 million, was replaced by works from younger artists including drawings by the Nigerian artist Ruby Onyinyechi Amanze.

The tower was designed by Kevin Roche, John Dinkeloo & Associates to fit its surroundings with a postmodern, Greek revival, and neoclassical look to emphasize both height and size. 60 Wall Street is surrounded by slender pre-World War II towers such as 70 Pine Street to the north, 48 Wall Street to the west, and 20 Exchange Place to the south, making a prominent impact on the Lower Manhattan skyline. The lobby has an entrance, open weekdays only, to the Wall Street subway station (2 and ​3 trains) on the New York City Subway's IRT Broadway–Seventh Avenue Line.

60 Wall Street is also known as a former locus of Occupy Wall Street activity during the protest occupation of nearby Zuccotti Park. In an October 2011 article in Bloomberg Businessweek entitled "60 Wall: The Real Headquarters of OWS," reporter Mark Gimein noted that the atrium was scheduled to host activist events like "the "vision and goals" meeting, the facilitation training sessions, the communications meeting."

In January 2012, Deutsche Bank installed a 122.4 kW solar photovoltaic (PV) system on the roof of the building in order to decrease carbon emissions by 100 metric tons per year. The system is the largest solar PV array in Manhattan and at 737 feet above the ground it is currently the highest elevated solar PV flat panel array in the world.

All content from Kiddle encyclopedia articles (including the article images and facts) can be freely used under Attribution-ShareAlike license, unless stated otherwise. Cite this article:
60 Wall Street Facts for Kids. Kiddle Encyclopedia.