Following several failed plans for development of the site, 383 Madison Avenue was constructed between 1999 and 2002 over the underground rail yards for the nearby Grand Central Terminal. 383 Madison Avenue housed the world headquarters of the now-defunct Bear Stearns from the building's completion until Bear's collapse and sale to JPMorgan Chase in 2008. The building now houses the New York offices for JPMorgan's investment banking division, which formerly occupied 277 Park Avenue. Both 383 Madison and 277 Park are adjacent to JPMorgan Chase's world headquarters address, 270 Park Avenue, and the 383 Madison building is serving as temporary headquarters while 270 Park is being redeveloped.

The original building at 383 Madison was a 14-story, 505,000 square feet (46,900 m2) limestone office building designed by Cross & Cross and named the Knapp Building. The building occupied the entire block and had served as the headquarters of the Manhattan Savings Bank, BBDO, and William Zeckendorf's Webb & Knapp.

In October 1982, G Ware Travelstead and First Boston acquired the building for $77.75 million and hired Skidmore, Owings & Merrill (SOM) to design a new replacement for the site. Initial studies for the project reached up to 2,200,000 square feet (200,000 m2) and 140 stories, taller than Sears Tower, the tallest building in the world at the time.

A 72-story, 1,040 feet (320 m) tall tower was later proposed in the mid-1980s. The building (also referred to as the Travelstead Tower), which would have been the fourth-tallest in New York City, was designed by Kohn Pedersen Fox (KPF) and would have spanned 1,400,000 square feet (130,000 m2). KPF incorporated several setbacks into the design, and planned to construct the Travelstead Tower out of steel and reinforced concrete. The office floors were to be arranged in a cross, with columns in the building's core because of the presence of underground tracks for Grand Central Terminal under the site. There would have been three sections in the tower: trading floors made of concrete; a series of office stories capped by a shoulder truss, and the top 20 stories above the truss.

However, the site was only zoned for 600,000 square feet (56,000 m2) and needed to purchase additional air rights from Grand Central Terminal to hit the targeted square footage. The building ran into opposition trying to transfer the air rights, with New York's Manhattan Community Board 5 voting unanimously to deny the transfer in June 1989. Following the Community Board's opposition, the New York City Planning Commission also unanimously disapproved of the transfer. The developers sued the city in the New York Supreme Court, but the court upheld the city's decision to deny the rights transfer, effectively cancelling the project.

In 1994, Howard Ronson's HRO International signed a deal giving the firm the option to buy the property for $55 million from First Boston. The developer planned a 24-story, $200 million building named Park Avenue Place on the site. The 800,000 square feet (74,000 m2) tower was planned for completion in the third quarter of 1996. HRO planned to reuse the old building's foundations and also solicited tax breaks from the city government. Ronson was reportedly in discussions with Morgan Guaranty Trust and Swiss Re about anchoring the building. However, in January 1996 First Boston reneged on their deal with HRO and instead signed a contract to sell the land to Bear Stearns. Another conflict unfolded when First Boston's partner in the site, the al-Babtain family of Saudi Arabia, announced in February 1996 that they would be buying out First Boston's stake to take control of the entire site. The family's ownership stake included a right of first refusal if First Boston attempted to sell the property.

JP Morgan Chase entered negotiations with the al-Babtain family in October 1996, hoping to build a new headquarters for themselves on the site, near their existing headquarters at 270 Park Avenue. Bear Stearns signed a 99-year lease for the land beneath the building in 1999 with plans to move its headquarters and most of its 4,500 employees to the new building. Hines Interests managed the development process for Bear Stearns. In mid-2001, before the September 11 attacks, the bank installed a mosaic in its lobby, showing Manhattan's skyline before the World Trade Center was built. It was completed in 2001 and opened in 2002.

The building changed hands in 2008 during JPMorgan's takeover of Bear Stearns. On their second-quarter 2008 conference call, JP Morgan estimated the building's value at $1.1 to $1.4 billion. 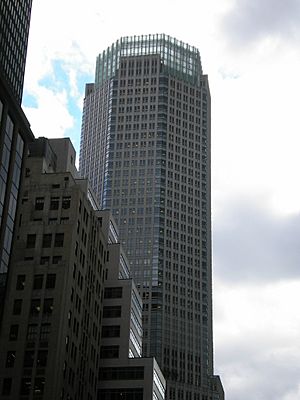 The glass "crown" at top

Designed by David Childs of SOM, it is 755 feet (230 m) tall with 47 floors and approximately 1,200,000 square feet (110,000 m2) available for rent. The building has an octagonal tower that rises out of a rectangular eight-story base. The facade is made of granite with glass panels. The tower terminates at a 70-foot (21 m) crown made of glass which is illuminated at night.

Two-thirds of the building’s foundation sit on slabs atop the Metro-North Railroad's Grand Central Terminal yards rather than being attached to the bedrock itself. The tunnels also required Bear Stearns to move HVAC and mechanical equipment that would usually sit in the basement up higher in the building. The building utilizes 285,866 square feet (26,557.8 m2) of air rights from the terminal's yards.

The building's visually decorative design differs from the conventional functionalist style of neighboring office buildings, and hence has proven unpopular with some critics. New York said, "This is a building you wouldn't want to get anywhere near at a cocktail party. Dressed nearly head to toe in dour granite, and geometrically proper, it's stiff to the point of pass-out boredom. Out of character with SOM' current work, the design recalls the firm's unfortunate postmodern interlude a decade ago."

A night time photograph of the building taken at a steep angle from its base appears on the cover of William D. Cohan's book, House of Cards: A Tale of Hubris and Wretched Excess on Wall Street (2009).

All content from Kiddle encyclopedia articles (including the article images and facts) can be freely used under Attribution-ShareAlike license, unless stated otherwise. Cite this article:
383 Madison Avenue Facts for Kids. Kiddle Encyclopedia.