270 Park Avenue (also known as the JPMorgan Chase Tower and formerly the Union Carbide Building) was a high-rise office building located in Midtown Manhattan, New York City. It was designed by Gordon Bunshaft and Natalie de Blois for Skidmore, Owings & Merrill. 270 Park Avenue was built between 1957 and 1960 and was 708 ft (216 m) tall.

As of 2019[update], the building is being demolished to make room for a taller building on the same site. It is the tallest voluntarily demolished building in the world, overtaking the previous record holder Singer Building that was demolished in 1968. The building was the world headquarters for JPMorgan Chase, and during the deconstruction, 383 Madison Avenue is serving as temporary headquarters. 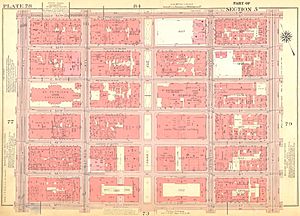 After the construction of Grand Central Terminal in 1913, the now fashionable "Terminal City" area north of the terminal was ripe for investment. Developer Dr. Charles V. Paterno built what was called the largest apartment building in the world with two distinct sections. The mansion-like apartments that took the address 270 Park Avenue, and the apartment hotel that used the name Hotel Marguery on Madison Avenue. The residents would share a 70-by-275-foot (21 by 84 m) garden with a private drive. As the restrained brick and stone structure rose, Manhattan millionaires rushed to take apartments.

The 6-building complex which formed the 12-story, stone-clad Renaissance Revival Hotel Marguery was built in 1917 by Dr. Paterno at a cost of more than $5 million. New York Central Railroad owned the land underneath the project since the construction of Grand Central Terminal. The buildings were centered around a 250-foot-long Italian Garden which occupied the center of the block. When the building was first constructed, Vanderbilt Avenue passed through the center of the buildings where the garden was eventually built. After the street was closed, the hotel built a 60 feet (18 m) tall carriage arch which allowed private access to the courtyard. The buildings contained 29 stores, 180 long-term apartments, and 110 luxury suites which ranged from 6 to 16 rooms apiece. By the 1940s, the high-end apartments rented for over $20,000 per month on average.

On January 3, 1930, an explosion started a fire in the basement of the building which cut power and killed two people due to smoke inhalation. In 1933, the hotel's owners sued to reduce their property taxes significantly on the grounds that the property's assessed value was almost $5 million too high. After eight years in court, Justice Charles B. McLaughlin reduced the assessment in 1941 by an aggregate $19.588 million for the previous eight years, resulting in a refund of over $600,000 to the hotel's owners. In 1923, Nikola Tesla rented rooms at the Hotel Marguery. Harry Frazee, the owner of the Boston Red Sox who sold Babe Ruth to the Yankees, also lived here. In June 1945, a wealthy textile executive named Albert E. Langford was shot to death in the hallway outside of his apartment on the seventh floor of the Hotel Marguery. In September 1947, the NYPD busted an underground gambling ring in the hotel, arresting 11 men.

Plans for a replacement to the Hotel Marguery had first surfaced in 1944, when William Zeckendorf's Webb and Knapp planned a new 34-story structure. The building would have had a limestone facade with decorative vertical stainless steel columns. In 1945, CBS agreed to occupy the building but quickly backed out. Department store Wanamaker's also reportedly considered the site for an uptown location in addition to the main branch at Broadway and Ninth. Plans for the new structure faced a setback in 1946 when the Office of Price Administration denied Webb & Knapp's petition to evict the 116 residents of the building.

In the late 1940s, Time Inc. had an option to purchase the property and build a new headquarters for the company. The company planned a 39-story, 1 million square feet (93,000 m2) building designed by Harrison & Abramovitz which was approved in June 1947, despite the protests of the hotel tenants. Time would have occupied 350,000 square feet (33,000 m2) of the space as its new world headquarters. At $23 million, the project was expected to be the largest private construction project in Manhattan since the end of World War II. Following the new tower's approval, the Marguery's tenants announced they would fight the decisions in the courts and through the city's Office of Rent Control. The tenants of the hotel hired New York prosecutor Peter McCoy as their attorney to oppose the destruction of the buildings. McCoy had previously prosecuted stockbrokers for the government before entering private practice. The tenants also appealed to the New York City Council to oppose the demolition. In 1948, the hotel closed as it had lost its luster and was reportedly "heavily populated by ladies of the night and by gambling outfits.” Due to the failure to evict the Marguery's tenants, Time gave up on the plans for a new tower in March 1950. Ultimately, Time instead moved to 1271 Avenue of the Americas at Rockefeller Center in 1958.

By 1951, the Hotel Marguery's former Italian Gardens had been converted to a parking lot. The same year, Webb & Knapp unveiled plans to spend $50 million building a 44-story, 580 feet (180 m) tall office building on the site. The building would be topped by a 1,000 feet (300 m) tall steel latticework observation tower, making the proposed building taller than the Empire State Building and the tallest building in New York City.

After threatening to move to suburban Elmsford, New York in Westchester County, chemical company Union Carbide agreed to lease the site in August 1955 to serve as its world headquarters. The company signed a lease with the New York Central Railroad to pay $250,000 per year plus the property's real estate taxes (estimated to be $1.5 million per year) for a term of at least 22 years. In addition, Union Carbide paid the railroad $10 million for the option to acquire the land outright in the future. At the time, the Marguery had been almost entirely converted from apartments into office suites. Some of the 250 tenants included Renault, Rheem Manufacturing Company, Georgia-Pacific, Nedick's, Damon Runyon Cancer Research Foundation, Airlines for America, The Manila Times, and the United Nations delegations for Mexico, Ethiopia, Liberia, and Venezuela.

In August 1955, the company unveiled plans for a 41-story, 800,000 square feet (74,000 m2) office building on the site which would be entirely occupied by the company and completed by 1958. In July 1956, architects Gordon Bunshaft and Natalie de Blois of Skidmore, Owings & Merrill increased the size of building by 11 stories to 52 floors and Union Carbide pegged the new tower's cost at $46 million. Demolition of the former hotel began in early 1957 and was completed by late August. The new building was completed in 1961 and maintained the distinction of being the tallest woman-designed building in the world for almost 50 years.

The first 700 Union Carbide employees moved into the building in April 1960. By the building's completion, Union Carbide occupied 41 floors home to over 4,000 employees. Other early tenants in the building included management consulting firm McKinsey & Company, who occupied 64,000 square feet (5,900 m2) of space. In 1976, Union Carbide purchased the land beneath the building from the bankrupt Penn Central Transportation Company for $11 million. The building continued to serve as the headquarters for Union Carbide until the company moved to Danbury, Connecticut in 1981.

In 2012, JPMorgan Chase announced that 270 Park had achieved Platinum LEED status following what was then the largest such renovation in history.

The building was vacated in 2018 in preparation for demolition and construction of a new JPMorgan Chase headquarters on the same site.

In February 2018, JPMorgan announced it would demolish the current building on the site to make way for a newer building that will be 678 feet (207 m) taller than the existing structure. The tower would thus become the tallest voluntarily demolished building in the world, as well as the third-tallest ever to be destroyed, after the World Trade Center Twin Towers. The demolition began in 2019, and the new building is expected to be completed. The replacement 1,388 feet (423 m) and 63-story headquarters will have space for 15,000 employees, whereas the current building accommodates 6,000 employees in a space designed for a capacity of 3,500. The new headquarters is part of the East Midtown rezoning plan. Tishman Construction Corporation will be the construction manager for the project. To build the larger structure, JPMorgan purchased hundreds of thousands of square feet of air rights from nearby St. Bartholomew's Episcopal Church as well as from Michael Dell's MSD Capital, the owner of the air rights above Grand Central Terminal.

In October 2018, JPMorgan announced that British architectural firm Foster + Partners would design the new building. The plans for the new building had grown to 1,388 feet (423 m), though the zoning envelope allowed for a structure as high as 1,566 feet (477 m). However, this also raised concerns that the taller building would require deeper foundations that could interfere with the Metropolitan Transportation Authority's East Side Access tunnels and the Grand Central Terminal's rail yards, which are directly underneath 270 Park Avenue.

In May 2019, New York City Council unanimously approved JPMorgan's headquarters. In order to secure approvals, JPMorgan was required to contribute $40 million to a district-wide improvement fund and incorporate a new 10,000 square feet (930 m2) privately owned public space plaza in front of the tower. After pressure from Manhattan Borough President Gale Brewer and City Council member Keith Powers, JPMorgan also agreed to fund numerous upgrades to the public realm surrounding the building including improvements to Grand Central's train shed as well as a new entrance to the station at 48th Street. In July 2019, the MTA and JPMorgan Chase signed an agreement, in which JPMorgan agreed to ensure that the deconstruction of 270 Park Avenue would not disrupt the timeline of East Side Access.

In July 2019, scaffolding was wrapped around the tower and podium structure on the Madison Avenue side of the building, marking the beginning of building demolition. Demolition is scheduled to be completed at the end of 2020; a date for completion of construction for the new building has not been announced.

All content from Kiddle encyclopedia articles (including the article images and facts) can be freely used under Attribution-ShareAlike license, unless stated otherwise. Cite this article:
270 Park Avenue Facts for Kids. Kiddle Encyclopedia.