St. Bartholomew's Church, commonly called St. Bart's, is a historic Episcopal parish founded in January 1835, and located on the east side of Park Avenue between 50th and 51st Street in Midtown Manhattan, in New York City. In 2018, the church celebrated the centennial of its first service in its Park Avenue home.

On October 31, 2016, the St. Bartholomew's Church and Community House complex was designated a National Historic Landmark, for its significance as an important example of early 20th-century ecclesiastical architecture designed by Bertram Goodhue. 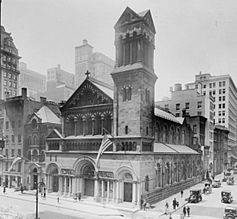 The congregation's first location was opened for service in January 1835, in a plain church at the corner of Great Jones Street and fashionable Lafayette Place.

The second location, built from 1872 to 1876 at the southwest corner of Madison Avenue and East 44th Street, was designed by James Renwick, the architect of St. Patrick's Cathedral, in the Lombardic style. The building was embellished in 1902–1903 with a triple French Romanesque Revival portal by Stanford White, who took as his inspiration the church of Saint-Gilles, Gard, between Arles and Nîmes, which White had admired in 1878; the sculptures in the tympana are Renaissance-inspired. The portal was paid for by the family of Cornelius Vanderbilt II as a memorial; Vanderbilt's father, William H. Vanderbilt, had sold the site to the church. The magnificent bronze doors, with bas-reliefs in panels depicting episodes from the Old and New Testaments, were carried out by some of New York's established sculptors: Andrew O'Connor, working freely under the general direction of Daniel Chester French, executed the main door; the south door was executed by Herbert Adams, the north door by Philip Martiny.

The current church was erected in 1916–17. The original freely handled and simplified Byzantine Revival design by Bertram Goodhue was called "a jewel in a monumental setting" by Christine Smith in 1988. Goodhue modified his design in response to the requirement that the old church portal, beloved by the parishioners, be preserved, with its bronze doors, from the Madison Avenue building and re-erected on the new site.

The foundation stone of Goodhue's original design, a vast, unified barrel-vaulted space, without side aisles or chapels and with severely reduced transepts, was laid 1 May 1917 and the construction was sufficiently far along for the church to be consecrated in 1918; its design was altered during construction, after Goodhue's sudden, unexpected death in 1924, by his office associates, in partnership as Mayers, Murray and Philips; they were engaged in erecting the community house, continuing with the same materials, subtly variegated salmon and cream-colored bricks and creamy Indiana limestone; they designed the terrace that still provides the equivalent of a small square, surrounded by the cliff-like facades of Midtown commercial structures; in summer, supplied with umbrellas and tables, it becomes the outside dining area for the restaurant, Inside Park. They also inserted the "much discussed"< dome, tile-patterned on the exterior and with a polychrome Hispano-Moresque interior dome, which substituted for the spire that had been planned but never built. Completed in 1930, the church contains stained-glass windows and mosaics by Hildreth Meiere, and a marble baptismal font by the Danish follower of Canova, Bertel Thorvaldsen. St. Bartholomew's was completed at a cost of $5.4 million.

Saint Bartholomew's Church and Community House was designated a landmark by the New York City Landmarks Preservation Commission in 1967, a move opposed at the time by the rector and vestry. Beginning in 1981, St. Bartholomew's found itself the subject of a much-publicized case concerning air rights in the highly-competitive New York real estate market clashing with historical preservation. Some of the members of the parish wanted to replace the community house and open terrace with a high-rise commercial structure that would re-capitalize the parish's depleted funds; following a series of public hearing the Landmarks Preservation Commission turned down the plans for a high-rise office building. The U.S. Supreme Court eventually resolved the matter in favor of the Landmarks Commission.

St. Bartholomew's is noted for its pipe organ, the largest in New York and one of the ten largest in the world. One of the church's former choir-directors was the famous conductor Leopold Stokowski, who was brought from the United Kingdom by St. Bart's; he was followed by the organist-choirmaster David McKinley Williams. Another of the church's music directors was Harold Friedell, the well-known composer and Juilliard educator. The church's choir has achieved distinction under the direction of conductors such as William Trafka and James Litton. The Chorister Program has also had success in bringing together children ages 6–18 to sing in the church, and has been featured on shows such as The Today Show and Good Morning America.

All content from Kiddle encyclopedia articles (including the article images and facts) can be freely used under Attribution-ShareAlike license, unless stated otherwise. Cite this article:
St. Bartholomew's Episcopal Church (Manhattan) Facts for Kids. Kiddle Encyclopedia.