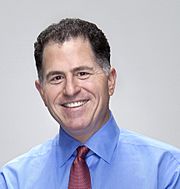 Michael Saul Dell (born February 23, 1965) is an American businessman. He created the computer technology company Dell. He was added as the 41st richest person in the world. Dell has about $19.9 billion dollars.

Dell was born on February 23, 1965 in Houston, Texas. He was born to a Jewish family. Dell dropped out from the University of Texas at Austin. Dell married Susan Lieberman in 1989. They have four children.

All content from Kiddle encyclopedia articles (including the article images and facts) can be freely used under Attribution-ShareAlike license, unless stated otherwise. Cite this article:
Michael Dell Facts for Kids. Kiddle Encyclopedia.