8 Spruce Street, previously known as the Beekman Tower and New York by Gehry, is a 76-story skyscraper designed by architect Frank Gehry at 8 Spruce Street in the Financial District of Manhattan, New York City.

8 Spruce Street is one of the tallest residential towers in the world, and it was the tallest residential tower in the Western Hemisphere at the time of opening in February 2011. The building was developed by Forest City Ratner, designed by Frank Gehry Architects and WSP Cantor Seinuk Structural Engineers, and constructed by Kreisler Borg Florman. It contains a public elementary school owned by the Department of Education. Above that and grade-level retail, the tower contains only residential rental units. The skyscraper's structural frame is made of reinforced concrete, and form-wise it falls within the architectural style of Deconstructivism along with Aqua, a skyscraper in Chicago begun after but completed before 8 Spruce. 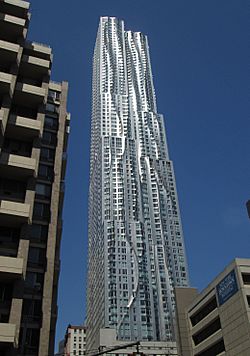 As seen from Gold Street

The school is sheathed in reddish-tan brick, and covers 100,000 square feet (9,300 m2) of the first five floors of the building. It hosts over 600 students enrolled in pre-kindergarten through eighth grade classes. A fourth floor roof deck holds 5,000 square feet (460 m2) of outdoor play space.

Above the elementary school is a 904-unit luxury residential tower clad in stainless steel. The apartments range from 500 square feet (46 m2) to 1,600 square feet (150 m2), and consist of studios, one-, two- and three-bedroom units. All units are priced at market-rate, with no low or moderate income-restricted apartments. All units are rental-only; none are available for purchase.

The building originally included space for New York Downtown Hospital next door. The hospital was allocated 25,000 square feet (2,300 m2), of parking below ground. It was never used. As of 2016, it is a commercially-operated valet parking garage.

There are public plazas on both the east and west sides of the building, one 11,000 square feet (1,000 m2) and the other somewhat smaller.

During the COVID-19 pandemic in New York City in 2020, about one of every five units were vacant.

All content from Kiddle encyclopedia articles (including the article images and facts) can be freely used under Attribution-ShareAlike license, unless stated otherwise. Cite this article:
8 Spruce Street Facts for Kids. Kiddle Encyclopedia.