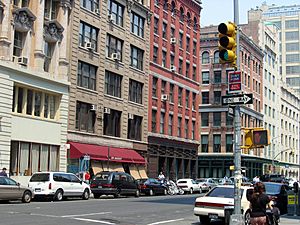 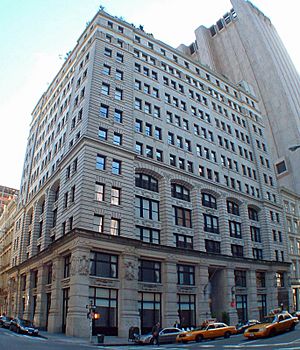 Tribeca originally written as TriBeCa, is a neighborhood in Lower Manhattan, New York City. Its name is a portmanteau from "Triangle Below Canal Street". The "triangle", or more accurately, a trapezoid, is bounded by Canal Street, West Street, Broadway, and either Chambers or Vesey Streets. The neighborhood is home to the Tribeca Film Festival.

Tribeca is one of a number of neighborhoods in New York City whose names are portmanteaus, including SoHo, NoHo, Nolita, NoMad, and BoCoCa, the latter of which is actually a collection of neighborhoods.

The Tribeca name came to be applied to the area south of Canal Street, between Broadway and West Street, extending south to Chambers Street. In the early 1970s, a couple of years after artists in SoHo were able to legalize their live/work situation, artist and resident organizations in the area to the south, known then as Washington Market or simply the Lower West Side, sought to gain similar zoning status for their neighborhood. A group of Lispenard Street artist/residents living on triangular shaped tax block number 210, directly south of Canal Street between Church Street and Broadway, in an area now part of the landmarked Tribeca Historic District, joined the effort. Just as the members of the SoHo Artists Association called their neighborhood "SoHo" after looking at a City Planning map which marked the area as "South of Houston" (city planners had been casually using the word "SoHo" as well), these Lispenard Street residents likewise employed a City Planning map to describe their block.

Lispenard Street, east–west as is Canal, is only two blocks long and creates the first block south of Canal from West Broadway to Broadway. The Canal–Lispenard block that runs from Church Street to Broadway is wide at Church Street but is narrower at Broadway. Thus, it appears somewhat triangular on City maps, unlike a rectangle as most city blocks are depicted. The Lispenard Street residents decided to name their group the Triangle Below Canal Block Association, and, as activists had done in SoHo, shortened the group’s name to the Tribeca Block Association. A reporter covering the zoning story for The New York Times came across the block association’s submission to City Planning, and mistakenly assumed that the name Tribeca referred to the entire neighborhood, not just one block. Once the “newspaper of record” began referring to the neighborhood as Tribeca, it stuck. This was related by former resident and councilmember for the area, Kathryn Freed, who was involved in the 1970s Tribeca zoning effort. 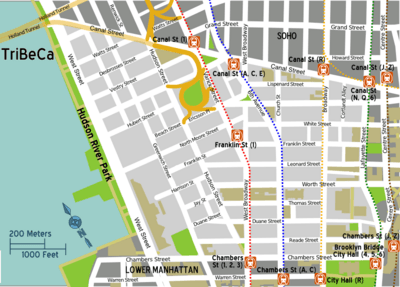 Map of Tribeca (excluding the portion south of Chambers Street) and major parks and transit connections.

The area was among the first residential neighborhoods developed in New York beyond the boundaries of the city during colonial times, with residential development beginning in the late 18th century.

By the mid-19th century the area transformed into a commercial center, with large numbers of store and loft buildings constructed along Broadway in the 1850s and 1860s. Development in the area was spurred by New York City Subway construction, namely the extension of the IRT Broadway – Seventh Avenue Line (today's 1 2 3 trains), which opened for service in 1918, and the accompanying extension of Seventh Avenue and the widening of Varick Street during subway construction in 1914, both of resulted in better access to the area for vehicles and for subway riders. The area was also served by the IRT Ninth Avenue Line, an elevated train line on Greenwich Street demolished in 1940. However, by the 1960s, Tribeca's industrial base had all but vanished, and the predominance of empty commercial space attracted many artists to the area in the 1970s. Since the 1980s, large scale conversion of the area has transformed Tribeca into an upscale residential area.

In 1996, the Tribeca Open Artist Studio Tour was founded as a non-profit, artist-run organization with the mission to empower the working artists of Tribeca while providing an educational opportunity for the public. For 15 years, the annual free walking tour through artist studios in Tribeca has allowed people to get a unique glimpse into the lives of Tribeca's best creative talent. Tribeca suffered both physically and financially after the September 11, 2001 terrorist attacks, but government grants and incentives helped the area rebound fairly quickly. The Tribeca Film Festival was established to help contribute to the long-term recovery of lower Manhattan after 9/11. The festival also celebrates New York City as a major filmmaking center. The mission of the film festival is "to enable the international film community and the general public to experience the power of film by redefining the film festival experience." Tribeca is a popular filming location for movies and television shows.

By the early 21st century, Tribeca became one of Manhattan's most fashionable and desirable neighborhoods, well known for its celebrity residents. In 2006, Forbes magazine ranked its 10013 zip code as New York City's most expensive (however, the adjacent, low-income neighborhood of Chinatown, also uses the 10013 zip code). As of 2010[update], Tribeca was the safest neighborhood in New York City, according to NYPD and CompStat statistics. 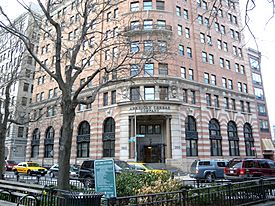 Tribeca is dominated by former industrial buildings that have been converted into residential buildings and lofts, similar to those of the neighboring SoHo-Cast Iron Historic District. In the 19th and early 20th centuries, the neighborhood was a center of the textile/cotton trade.

Notable buildings in the neighborhoods include the historic neo-Renaissance Textile Building built in 1901 and designed by Henry J. Hardenbergh, the Powell Building, a designated Landmark on Hudson Street, which was designed by Carrère and Hastings and built in 1892. At 73 Worth Street there is a handsome row of neo-Renaissance White Buildings built at the end of the Civil War in 1865. Other notable buildings include the New York Telephone Company building at 140 West Street, between Vesey and Barclay, with its Mayan-inspired Art Deco motif, and the former New York Mercantile Exchange at 6 Harrison Street.

During the late 1960s and '70s, abandoned and inexpensive Tribeca lofts became hot-spot residences for young artists and their families because of the seclusion of lower Manhattan and the vast living space. Jim Stratton, a Tribeca resident since this period, wrote the 1977 nonfiction book entitled "Pioneering in the Urban Wilderness," detailing his experiences renovating lower Manhattan warehouses into residences.

Although Wizards of Waverly Place includes a fictional "Tribeca Academy," exterior shots were filmed at P.S. 40 on East 20th Street, between First Avenue and Second Avenue in midtown Gramercy Park. In addition, a fictional "Tribeca High School" appears in the Law & Order: Special Victims Unit episode "Granting Immunity." Local radio station WHTZ's studio is located here. In the third book of the Witches of East End series, Winds of Salem, the Oracle, an almighty god from Asgard, lives in Tribeca.

All content from Kiddle encyclopedia articles (including the article images and facts) can be freely used under Attribution-ShareAlike license, unless stated otherwise. Cite this article:
Tribeca Facts for Kids. Kiddle Encyclopedia.