Sarah Michelle Gellar (born April 14, 1977) is an American actress. After several television acting roles during the 1990s, Gellar became famous for playing Buffy Summers in the television series Buffy the Vampire Slayer. After Buffy, she started acting in movies. She has starred in the family movies Scooby-Doo (2002) and Scooby-Doo 2: Monsters Unleashed (2004), the movie Harvard Man (2001), and the horror movies The Return (2006), The Grudge 2 (2006), The Grudge (2004) and I Know What You Did Last Summer (1997). She won an award for her part in the 1999 movie Cruel Intentions.

Gellar was born in New York City. She is the only child of Rosellen Greenfield and Arthur Gellar. Both of her parents were Jewish, but Gellar's family had a Christmas tree during the holidays while she was growing up. In 1984, her parents divorced. She was raised by her mother on New York's Upper East Side. Gellar and her father did not have a good relationship from this time until his death from liver cancer on October 9, 2001. She went to school at New York's Columbia Grammar & Preparatory School and the Professional Children's School. Gellar was a very good student and was a good figure skater. Her best friend was Melissa Joan Hart. Several years later, Hart was the star of the series Clarissa Explains It All and Sabrina, the Teenage Witch. 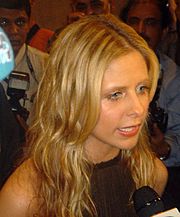 At the age of four, Gellar was seen by an talent agent in a restaurant in Uptown Manhattan. Two weeks later, she auditioned for a part in An Invasion Of Privacy, a movie made for television. The movie starred Valerie Harper, Carol Kane and Jeff Daniels. At the audition, Gellar read the lines for both her own character and Harper's character. The directors thought this was very impressive and she got the job. A short while later, she got a part in a television commercial for the fast food restaurant Burger King. In it, she said bad things about McDonald's and said she only ate at Burger King. Gellar made other commercials while doing other acting job. Some of these jobs were playing Emily in an episode of the TV series Spenser: For Hire, appearing in a small role in the Chevy Chase comedy movie Funny Farm and in the movie High Stakes. She was also in Europe working on the TV series Crossbow. In 1991, she played a young Jacqueline Bouvier in A Woman Named Jackie. 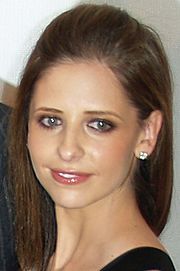 Gellar in 2007 by David Shankbone

Gellar's major break came in 1992. She starred in the teen soap opera Swan's Crossing. After that, she got a part in another soap opera, All My Children. She playing the character Kendall Hart, the long-lost daughter of character Erica Kane (Susan Lucci). In 1995, at the age of eighteen, she won a Daytime Emmy Award for Outstanding Younger Leading Actress in a Drama Series for her work as Kendall Hart.

Gellar left All My Children in 1995. People were saying that her and Susan Lucci did not get along and this caused problems with them working together. She got the main role in the 1997 TV series Buffy the Vampire Slayer. She played a teenager who had to fight many of supernatural enemies with the help of the Scooby Gang and her Watcher (a mentor). The show was well liked by both the critics and the audience. Another series, (Angel), was made based on characters from Buffy. Buffy was on television for seven seasons and a total of 144 episodes. During the show, Buffy, and Gellar also, became cult icons in the United States and the UK. They were a symbol of "empowered" women. Gellar also sang several of the songs during the Buffy the Vampire Slayer musical episode "Once More, with Feeling".

During the show's later years, Gellar said she did not like some parts of season six and the seventh season's final episode. After the show ended, Gellar said that she did not want to be in a Buffy movie. Since that time, she has said she might do it if the script is good enough.

Gellar's picture has been used on the covers of Cosmopolitan, Glamour, FHM, Rolling Stone, and other magazines. She was part of Maxim's Hot 100 list in 2002, 2003, and 2005, and in FHM's 100 Sexiest Women of 2005. In 1998, she was named one of People Magazine's "50 Most Beautiful People (in the World)". Gellar has also been in the Stone Temple Pilots music video Sour Girl and is a celebrity spokesperson for the cosmetics company, Maybelline.

After Buffy, Gellar tried to use her television fame for a movie career. Some of her movies were well liked, others were not. After roles in the popular horror movies I Know What You Did Last Summer and Scream 2 (both 1997), she starred in the 1999 movies Simply Irresistible, a romantic comedy, and Cruel Intentions. Cruel Intentions was a small hit at the box office. It made over $38 million in the United States.

Gellar starred as Daphne in the box office success Scooby-Doo (2002), a live-action version of the cartoon series. Gellar was also in the sequel, Scooby-Doo 2: Monsters Unleashed (2004), which made less money than the first movie. Gellar's next movie was the 2004 horror movie The Grudge. It was very well liked. Gellar appeared in the sequel The Grudge 2. It opened on October 13, 2006. She has also starred in several movies that have yet to be released, including Southland Tales, The Air I Breathe and The Girls' Guide to Hunting And Fishing. 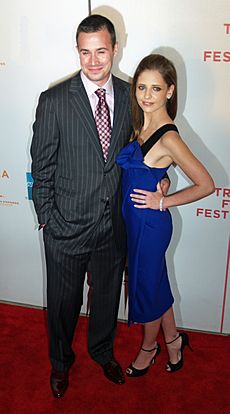 Gellar met her husband Freddie Prinze, Jr. during filming of the 1997 teen horror movie I Know What You Did Last Summer but the two did not begin a intimate relationship until 2000. They were engaged to be married in April 2001. They got married in Jalisco, Mexico on September 1, 2002.

In 2004, while filming The Grudge in Japan, Gellar visited the famous Japanese swordmaker Shoji Yoshihara (Kuniie III) and bought a Katana from him as a birthday gift for her husband. Gellar found out that she needed permission from the government to take the sword out of the country. After she got permission, she said that it was incredibly difficult to do.

Together, Gellar and Prinze have two children, a daughter born in 2009 and a son born in 2012. The family lives in Los Angeles.

All content from Kiddle encyclopedia articles (including the article images and facts) can be freely used under Attribution-ShareAlike license, unless stated otherwise. Cite this article:
Sarah Michelle Gellar Facts for Kids. Kiddle Encyclopedia.