Washington Market Park is an urban park located in the TriBeCa neighborhood of Lower Manhattan in New York City. The park, which is bounded by Greenwich, Chambers, and West Streets, covers 1.61-acre (6,500 m2). The park also has community gardens and a large playground and hosts many community events.

The city of New York proposed the construction of a municipal parking lot on a disused dump site located just south of the Independence Plaza apartments in the late 1970s. Residents of TriBeCa, including former New York City councilwoman Kathryn E. Freed, protested the planned parking lot and campaigned for a new city park in their neighborhood. At the time, the tiny, triangular Duane Park was one of the few green spaces in TriBeCa. The activists successfully persuaded officials to build a park, which was called Washington Market Park, instead of the parking lot. 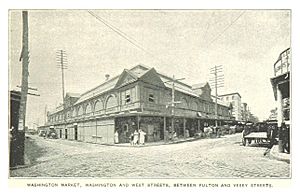 In the late 1970s, a federally-funded Community Block Development Grant was obtained from the city and used to design and build the existing park. Lee Weintraub, then an architect with the city's Housing Preservation and Development Corporation (HPD), was assigned to design the park. A not-for-profit corporation, Washington Market Community Park, Inc, was created in 1978 to oversee the park, to be run by a Board of Directors elected by the community.

In 2003, Mayor Michael Bloomberg included Washington Market Park as one of twelve parks in Lower Manhattan which received a combined $25 million in upgrades from the Lower Manhattan Development Corporation.

All content from Kiddle encyclopedia articles (including the article images and facts) can be freely used under Attribution-ShareAlike license, unless stated otherwise. Cite this article:
Washington Market Park Facts for Kids. Kiddle Encyclopedia.