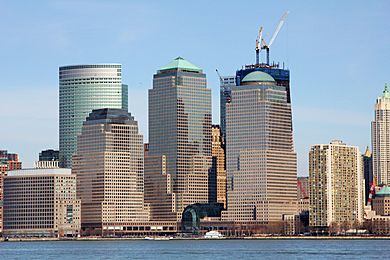 The World Financial Center as seen in April 2011. 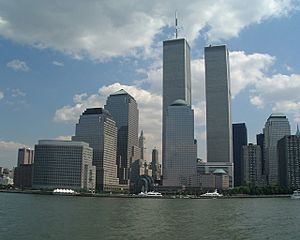 The World Financial Center standing by the World Trade Center in August 2000. 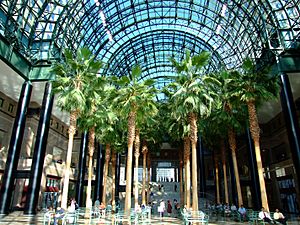 Brookfield Place, originally and commonly known as the World Financial Center is a complex of office buildings in Battery Park City in Lower Manhattan in New York City. It is near the World Trade Center. It is home to the offices of a number of companies such as Merrill Lynch, American Express, Brookfield Office Properties, and others. It was opened in 1988. It was designed by César Pelli.

The complex was very badly damaged in the September 11 attacks. It had to be closed for several months while repairs were being done.

The complex was renamed to "Brookfield Place" in 2013.

All content from Kiddle encyclopedia articles (including the article images and facts) can be freely used under Attribution-ShareAlike license, unless stated otherwise. Cite this article:
Brookfield Place Facts for Kids. Kiddle Encyclopedia.