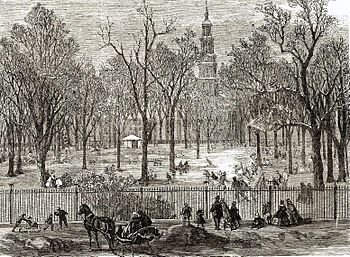 St. John's Park used to be a park in Lower Manhattan, New York City. It was square-shaped. To the west, north, east, and south were Varick, Laight, Hudson, and Beach Streets. The park is now a traffic circle at the Manhattan end of the Holland Tunnel to New Jersey.

It used to be a farm belonging to a New Netherland farmer. Then, the country of England gave the park to Trinity Church. The church built St. John's Chapel, as well as some townhouses, around the park. By 1827, people living in the area were very rich. In the 1850s, many rich people moved out. In 1866, Cornelius Vanderbilt bought the park for a railroad terminal. The terminal was destroyed in 1927. The Port Authority of New York and New Jersey's Holland Tunnel was built in 1927.

All content from Kiddle encyclopedia articles (including the article images and facts) can be freely used under Attribution-ShareAlike license, unless stated otherwise. Cite this article:
St. John's Park Facts for Kids. Kiddle Encyclopedia.