The area was originally a ferry landing, characterized by 19th- and early 20th-century industrial and warehouse buildings, Belgian block streets, and its location on the East River by the imposing anchorage of the Manhattan Bridge. The entirety of Dumbo was bought by developer David Walentas and his company Two Trees Management in the late 20th century, and remade into an upscale residential and commercial community—first becoming a haven for art galleries, and currently a center for technology startups.

The large community of tech startups earned DUMBO the nickname of "the center of the Brooklyn Tech Triangle". In that time, Dumbo had become Brooklyn's most expensive neighborhood, as well as New York City's fourth-richest community overall; this is owing in part to its large concentration of technology startups, its close proximity to Manhattan, and its large number of former industrial buildings that have been converted into spacious luxury residential lofts. The neighborhood is the corporate headquarters for e-commerce retailer Etsy and home furnishing stores company West Elm.

The name is an acronym of "Down Under the Manhattan Bridge Overpass". The area has been known variously as Rapailie, Olympia, and Walentasville;. the developer who began its current gentrification is Two Trees Management, led at the time by David Walentas. The "Olympia" name came from Comfort and Joshua Sands, who bought the land in 1787 and were planning to develop the land as a summer place for New Yorkers. Through the 18th and 19th centuries, the area now known as Dumbo was considered part of Vinegar Hill.

In the 1890s, the western portion of the neighborhood was known as Fulton Landing, after the ferry stop that connected it to Manhattan before the Brooklyn Bridge opened. At that time, it was primarily a manufacturing district, with warehouses and factories that made machinery, paper boxes and Brillo soap pads. The cardboard box was invented in the Robert Gair building on Washington Street by Robert Gair, a Scottish emigrant; because of Gair's fame, the area was known as Gairsville for a long time. The Gair building is now home to Etsy.

The Jay Street Connecting Railroad ran through Dumbo's waterfront from circa 1904–1906 through 1957. It ran from rail yards beneath the Manhattan and Brooklyn Bridges to buildings near the waterfront in Dumbo and Vinegar Hill. At the height of operations, it had spurs into several buildings, a car float bridge on Bridge Street, and a yard with capacity of 120 cars. The tracks were abandoned in 1959, though the railroad's tracks are still visible on streets in Dumbo. 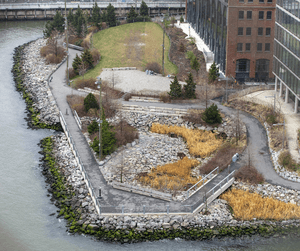 With the deindustrialization of New York City, Dumbo began to become primarily residential; artists and other young homesteaders seeking relatively large and inexpensive loft apartment spaces for studios and homes began moving there in the late 1970s. The acronym "Dumbo" arose in 1978, when new residents coined it in the belief such an unattractive name would help deter developers.

Near the end of the 20th century, as property became more and more expensive in Manhattan, Dumbo became increasingly gentrified. Even so, the acronym 'Dumbo' was largely unknown as late as 1997, and the area itself was very inclusive, serving mainly as an enclave for artists located along the East River and under the Manhattan Bridge. At this stage there were still many air conditioner repair shops, auto shops, and "seedy back alleys and wharves"; and, because the neighborhood was still gentrifying from its industrial past, it lacked even a bookstore, coffee shop, or laundromat. The efforts of Joy Glidden, the Founding Director of the Dumbo Arts Center (DAC) and co-founder of the Dumbo Art Under the Bridge Festival, achieved successful development in Dumbo, which is now a model for similar waterfront developments around the world. Glidden stated of Dumbo's gentrification, "It may be one of the last of what could be considered a true arts community in New York."

The area has emerged as one of New York City's premier arts districts, with a cluster of for-profit art galleries such as the Klompching Gallery, and such not-for-profit institutions as the St. Ann's Warehouse and the A.I.R. Gallery.

Chef Jacques Torres opened a chocolate factory in Dumbo in December 2000. Other culinary businesses in the area include Grimaldi's, Ample Hills Creamery, Almondine Bakery, and the River Café, all clustered in Fulton Landing, also home to Bargemusic, a floating venue for classical music. John Fluevog, a Canadian shoe designer, opened a store on Main Street in November 2017. Celebrity fans of his art-deco inspired shoes include Kit Harington, Woody Harrelson, and Beyoncé.

The first public space in the neighborhood was Fulton Ferry, followed by Empire-Fulton Ferry State Park. The first six acres of Brooklyn Bridge Park, a joint state/city venture under development, were opened in March 2010. The Cliffs at DUMBO is a 7,800 square foot outdoor climbing gym located in the Main Street section of Brooklyn Bridge Park, and is the largest outdoor bouldering gym in North America.

The building at 200 Water Street, which the Brillo Manufacturing Co. once occupied, is being renovated as a high-end condo building.

The DUMBO Archway is a popular location for film shoots, art exhibitions, live music, large-scale events, and watch parties for events like the World Cup. The trailer for Joker, the 2019 film by Todd Phillips, features actor Joaquin Phoenix as the Joker running through the archway. The Archway also hosts the Brooklyn Flea every Sunday from April to October. The outdoor market features 80 vendors, and the products range from secondhand goods to custom-made jewelry.

Gleason's Gym, located on Water Street, is the oldest boxing gym in New York. Many champions have trained there, including Muhammad Ali and Mike Tyson. The gym has been located in DUMBO since the 1980s. It moved from 77 Front Street to its current location at 130 Water Street in 2016. The legendary boxing coach Hector Roca still teaches at the Water Street location. In addition to boxing champions, Roca has trained many actors, including Wesley Snipes, Hilary Swank, Jennifer Lopez, and John Leguizamo.

The renovation of Empire Stores on Water Street was completed in 2017. Previously, it had been a Civil War era coffee warehouse. It was converted to mixed-use retail and office space, and it includes West Elm's global flagship store. Other retailers in Empire Stores include Detroit-based watchmaker Shinola and the café and accessories store, FEED Projects. In May 2017, the Brooklyn Historical Society (BHS) opened a new branch in Empire Stores (its main location is in Brooklyn Heights). BHS features exhibits and artifacts relating to DUMBO's industrial past. In May 2019, Time Out Market opened in Empire Stores. The food hall features 21 local vendors, including the Breads Bakery and DUMBO's renowned pizzeria, Juliana's.

Dumbo has New York City's highest concentration of technology firms by neighborhood. Dumbo is home to 25 percent of New York City-based tech firms. Within a 10-block radius are 500 tech and creative firms that employ over 10,000 people. It also contains the corporate headquarters for e-commerce retailer Etsy and home furnishing stores company West Elm. 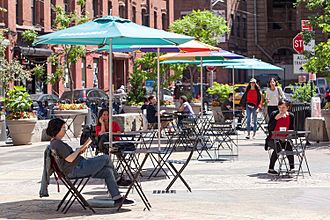 The City of New York, in conjunction with New York University, installed an incubator in Dumbo to support development of tech start-ups. Dumbo's average office rent of $25 per square foot makes it more attractive to start-ups than Manhattan, where rents averaged $40 per square foot in 2013. The area has been compared to the Silicon Roundabout area in Shoreditch, East London, as well as to Manhattan's Silicon Alley.

Ramps and staircases connect the Brooklyn Bridge and Manhattan Bridge walkways to Dumbo.

In June 2011, NY Waterway started service to points along the East River. On May 1, 2017, that route became part of the NYC Ferry's East River route, which runs between Pier 11/Wall Street in Manhattan's Financial District and the East 34th Street Ferry Landing in Murray Hill, Manhattan, with five intermediate stops in Brooklyn and Queens. One of the East River Ferry's stops is at Fulton Ferry in Dumbo.

The neighborhood contains the Farragut Houses, a group of ten towers managed by the New York City Housing Authority.

All content from Kiddle encyclopedia articles (including the article images and facts) can be freely used under Attribution-ShareAlike license, unless stated otherwise. Cite this article:
Dumbo, Brooklyn Facts for Kids. Kiddle Encyclopedia.