Jennifer Lynn Connelly (born December 12, 1970) is an American actress who began her career as a child model. She appeared in magazine, newspaper and television advertising, before she made her movie acting debut in the 1984 crime film Once Upon a Time in America. Connelly continued modeling and acting, starring in films such as the 1985 horror film Phenomena (her first leading role), and the 1986 musical fantasy film Labyrinth (opposite David Bowie). 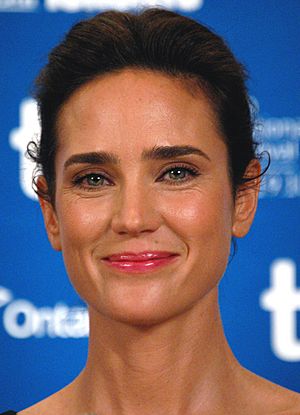 On November 14, 2005, Connelly was named Amnesty International Ambassador for Human Rights Education. She appeared in an advertisement highlighting the global need for clean water, and sought donations for African, Indian, and Central American drilling projects for the non-profit organization Charity: Water. On May 2, 2009, she participated in Revlon's annual 5k Run/Walk for Women. In May 2012, Connelly was named ambassador for Save the Children fund, to advocate for children's rights in the United States and worldwide.

She has been the face of Balenciaga fashion advertisements, as well as for Revlon cosmetics. In 2012, she was named the first global face of the Shiseido Company. Magazines including Time, Vanity Fair and Esquire, as well as the Los Angeles Times newspaper have included her on their lists of the world's most beautiful women. In the 1992 animated Disney movie Aladdin, Princess Jasmine was modeled after Connelly.

While filming The Rocketeer, she began a romance with co-star Billy Campbell. They were involved for five years before they broke up in 1996. Connelly then had a relationship with photographer David Dugan, with whom she had a son, Kai, born in 1997.

On January 1, 2003, in a private family ceremony in Scotland she married actor Paul Bettany, whom she had met while working on A Beautiful Mind. The couple's first child was born in August the same year. She gave birth to her third child in May 2011, in New York City.

All content from Kiddle encyclopedia articles (including the article images and facts) can be freely used under Attribution-ShareAlike license, unless stated otherwise. Cite this article:
Jennifer Connelly Facts for Kids. Kiddle Encyclopedia.