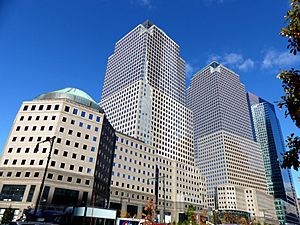 200 Vesey Street with the World Financial Center next to it, October 2015.

The building is an example of postmodern architecture, as designed by Cesar Pelli & Associates, and contains over 2.1 million square feet (195,000 m²) of rentable office area. It connects to the rest of the World Financial Center complex through a courtyard leading to the Winter Garden, a dramatic glass-and-steel public space with a 120 ft (37 m) vaulted ceiling under which there is an assortment of trees and plants, including sixteen 40 ft (12 m) palm trees from the Mojave Desert. It is notably similar in design to One Canada Square in London's Canary Wharf development. Canary Wharf was, like the World Financial Center, a project by Canadian developers Olympia & York, and One Canada Square was designed by the same principal architect.

Due to its status as the tallest tower in the complex, the building was subject to scathing criticism at the time of its construction. In 1985, the New York Times published an article lambasting the tower. ‟Not too long ago, it was possible to gaze all the way from mid-Manhattan to the skies over the harbor. Now, that vista has been pierced by the American Express tower being built in the World Financial Center at Battery Park City. At the moment, the skyscraper resembles a gigantic, upended, rectilinear fish skeleton. As construction proceeds, however, and the floors fill in, there will be a solid wall where there was once a generous slice of sky." 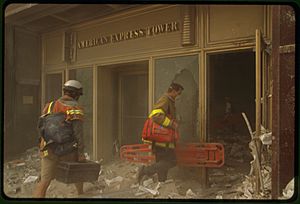 Two rescue workers entering the American Express Tower after the attacks on the World Trade Center.

Three World Financial Center was severely damaged by the falling debris when the World Trade Center towers collapsed on September 11, 2001. The building's southeast corner took heavy structural damage, though the effects were not enough to create a threat of collapse. The building had to be closed for repairs from September 11, 2001 until May 2002 as a result of damage sustained in the terrorist attacks.

3 World Financial Center is today the world headquarters of American Express, and was once World Headquarters of Lehman Brothers Holdings Inc. It was renamed 200 Vesey Street when the rest of the complex became Brookfield Place in 2014.

All content from Kiddle encyclopedia articles (including the article images and facts) can be freely used under Attribution-ShareAlike license, unless stated otherwise. Cite this article:
200 Vesey Street Facts for Kids. Kiddle Encyclopedia.