712 Fifth Avenue is a 650-foot-tall (200 m) skyscraper at 56th Street and Fifth Avenue in Midtown Manhattan, New York City. It was constructed from 1987 to 1990 to designs by SLCE Architects and Kohn Pedersen Fox Associates. The tower's design accommodates the facades of the Coty Building at 714 Fifth Avenue (built 1871) and the Rizzoli Bookstore building (constructed 1908) at the base of the tower, which are New York City designated landmarks.

Before the construction of the present skyscraper, 712 Fifth Avenue was the address of the Rizzoli Bookstore building. Planning for 712 Fifth Avenue dates to 1983, but was delayed for several years because of opposition to demolition of historic structures at 712 Fifth Avenue's base. Because of this, the Coty and Rizzoli buildings were incorporated into the tower's base, where a Henri Bendel store operated from 1990 until 2018. Upon completion, 712 Fifth Avenue was initially mostly vacant, though it was sold for a then-record $285 million in 1999.

Fifth Avenue between 42nd Street and Central Park South (59th Street) was relatively undeveloped through the late 19th century. The western side of the avenue, between 55th and 56th streets, contained the Fifth Avenue Presbyterian Church at the 55th Street corner and a series of brownstone houses on the rest of the block. The church built a brownstone with the address 712 Fifth Avenue in 1886. By the early 1900s, that section of Fifth Avenue was becoming a commercial area.

In March 1907, it was announced that Albert S. Gottlieb would design a five-story building (later to be known as the Rizzoli Building) with the address 712 Fifth Avenue, which would replace the old brownstone. The new structure, completed in 1908, was built in a similar style to other residential buildings erected at the same time. The Rizzoli Building was first occupied by interior decorators L. Alavoine & Company, which had leased space before construction had started. Other tenants included Cartier, a jeweler that had offices on the third floor from 1908 to 1917, as well as numerous art galleries on the first floor. The Rizzoli Building was owned by the Fifth Avenue Presbyterian Church until 1959, when Harry Winston bought it.

Rizzoli Bookstore, a division of Rizzoli Libri, purchased the building in 1963 and opened a branch there the next year. Rizzoli also bought the property at 718 Fifth Avenue, at the corner of 56th Street, as well as the building at 2 West 56th Street; this created a "L"-shaped building. The store then gained popularity as an unofficial landmark; it attracted customers with its "marble floors, oak paneling, sparkling chandeliers."

In 1983, developer David S. Solomon began planning the construction of a new 44-story office skyscraper with entrances on West 56th Street and on Fifth Avenue. Since neither the Rizzoli Building nor the adjacent Coty Building at 714 Fifth Avenue were designated as official landmarks, he intended to replace them. Steadsol Fifth Associates, a consortium of which Solomon was part, bought both buildings in 1984 with the intent of demolishing them. Several designs were proposed, including those for an apartment, hotel, apartment hotel, and office building. However, the Coty Building's grimy windows caught the attention of architectural historian Andrew Dolkart, who found that the Coty Building's windows were the only documented architectural work by René Lalique in the United States. Real estate developer Donald Trump, whose Trump Tower was across Fifth Avenue, also opposed the development of the new skyscraper, since it would compete with his building.

The Municipal Art Society petitioned the Landmarks Preservation Commission to designate the buildings, and both were designated on January 29, 1985, temporarily delaying the skyscraper's development. Due to a lack of communication between the New York City Department of Buildings and the Landmarks Preservation Commission, alteration permits for the Coty and Rizzoli Buildings were initially approved in spite of the designations. However, Steadsol Fifth Associates had its alteration permits for the Coty Building revoked afterward. In mid-1985, the developers submitted a revised plan to the commission, which approved the revisios. The plan, designed by Kohn Pedersen Fox, called for a 650-foot (200 m) tower with several setbacks, including a 50-foot (15 m) setback from Fifth Avenue and a 27-foot (8.2 m) setback for 56th Street. In preparation for the skyscraper's construction, the Coty Building's windows were restored in 1986; the building at 716 Fifth Avenue, a two-story jewelry store, was demolished. The same year, luxury store Henri Bendel announced its intent to move its flagship store to the base of 712 Fifth Avenue.

Steadsol Fifth Associates edited their plans again, which called for a 650-foot tower with straight facades, because the setbacks would have made the upper floors too small. This drew consternation from Manhattan Community Board 5, which requested that another hearing be held. The Landmarks Preservation Commission approved modified plans in March 1987. Construction began later that year, with the developers being a joint venture between Solomon and the Taubman Company. As part of the project, the landmark structures' facades were restored by Beyer Blinder Belle, which also designed the Henri Bendel flagship. A five-story neoclassical-style facade was also built at 716 Fifth Avenue. To make way for the Henri Bendel store's construction, the interiors of the landmark structures were completely demolished and the facade was braced back 50 feet into the new tower. The tower itself was designed to be set back at the 50-foot distance because the commission needed to approve any interior or exterior work within 50 feet of a landmark designation. The building was topped out by 1989. 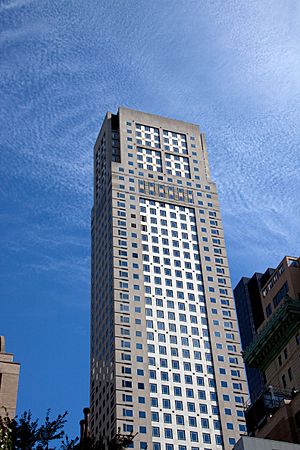 Viewed from the south

The Solomons withdrew from the development of 712 Fifth Avenue in 1990 because their company Solomon Equities had a hard time finding tenants in its other properties. Taubman then took over the project. At the time, the skyscraper was mostly vacant and seen as a white elephant project, with three-fourths of its space unused; in February 1991, there were six tenants, including the Taubman Company. Six months later, several small tenants had signed leases for a collective 200,000 square feet (19,000 m2) of space. Several floors were subdivided into smaller offices, some with shared conference rooms.

712 Fifth Avenue is 52 stories tall and contains 11 elevators, rising to a total height of 650 feet (200 m). It was designed by Kohn Pedersen Fox along with SLCE Architects. The building is a Leadership in Energy and Environmental Design basic silver certified structure.

712 Fifth Avenue rises from a base that includes three preexisting structures: the Rizzoli Building, the Coty Building, and the facade at 716 Fifth Avenue. The rest of the base was built with the skyscraper itself; the main entrance is through a classical-style loggia at ground level. The facade is made of pearl-gray marble, gray limestone, and black granite. On the middle floors of the tower, there are ten window bays per floor on the north and south facades, and eight bays on the east and west facades. The two outer bays on each side are set within pearl-gray marble, and the windows between the outermost bays are accented by black granite strips between each floor. The middle bays on each side are faced with granite, recessed slightly behind the marble, and contain larger windows. At the top, there are bronze medallions.

There is 545,000 square feet (50,600 m2) of space inside, or 9,800 square feet (910 m2) on average for each floor. The small floor areas of the upper floors are directed toward boutique tenants, such as fashion companies. All of the ground-level structures are internally connected; the Coty Building section of the skyscraper contains a four-story atrium. The skyscraper ultimately spans 12 separate parcels.

The five-story Rizzoli Building, designed by Albert S. Gottlieb, carried the address of 712 Fifth Avenue before the present skyscraper was built. Designed in the French classical style, the structure is about 120 feet (37 m) deep and is five stories tall with a limestone-and-brick facade. The facade is three bays wide, and at ground level, had a door in the rightmost bay. On the upper stories, the Rizzoli Building had a piano nobile with three full-height, arched windows, as well as balusters underneath each opening. There were also Rizzoli inscriptions above the second floor. The third and fourth floors' articulation was designed as a single unit, with each bay separated by pilasters containing Corinthian-style capitals; the windows on these floors are casement windows. The fifth floor is within a black slate mansard roof, recessed behind a stone balustrade. 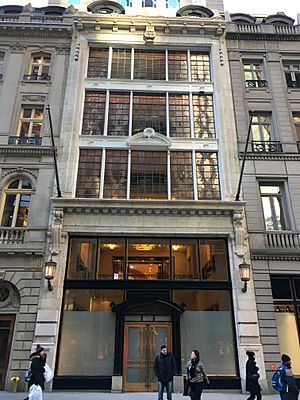 The Coty Building, with the Rizzoli Building at left and the 716 Fifth Avenue facade to the right
Main page: Coty Building#Architecture

The six-story Coty Building at 714 Fifth Avenue was redesigned by Woodruff Leeming and is designed as a frame around a glass wall. The first two stories have limestone-faced piers and a cornice. The third through the fifth stories are also treated as one unit, as a wall of glass. The glass windows were designed by René Lalique and comprise the only documented work by that architect in the United States. There are five vertical window bays, separated by thin vertical steel mullions. The top floor is set off by a modillioned cornice with console brackets supporting a balustrade. The sloping metal-covered roof with its arched dormers allowed the building to harmonize with its neighbors. Inside is a 5-story atrium with a balcony.

All content from Kiddle encyclopedia articles (including the article images and facts) can be freely used under Attribution-ShareAlike license, unless stated otherwise. Cite this article:
712 Fifth Avenue Facts for Kids. Kiddle Encyclopedia.