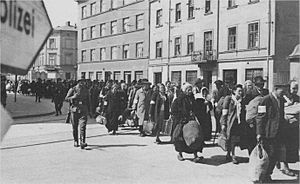 A ghetto is a part of a city in which members of a minority group live, typically as a result of social, legal, or economic pressure. The term was originally used in Venice to describe the part of the city to which Jews were restricted and segregated but has since been applied in various contexts.

All content from Kiddle encyclopedia articles (including the article images and facts) can be freely used under Attribution-ShareAlike license, unless stated otherwise. Cite this article:
Ghetto Facts for Kids. Kiddle Encyclopedia.