The Intrepid Sea, Air & Space Museum is an American military and maritime history museum in New York City with a collection of museum ships. It is located at Pier 86 at 46th Street, along the Hudson River, in the Hell's Kitchen neighborhood on the West Side of Manhattan. The museum showcases the aircraft carrier USS Intrepid, the cruise missile submarine USS Growler, a Concorde SST, a Lockheed A-12 supersonic reconnaissance plane, and the Space Shuttle Enterprise. On the lower deck there is also a reproduction of a World War I biplane.

Founded in 1982, the museum closed in 2006 for a 1.5-year renovation of Intrepid and facilities. Those included new exhibits. The museum reopened to the public on November 8, 2008. 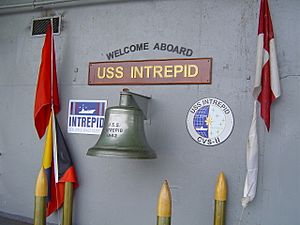 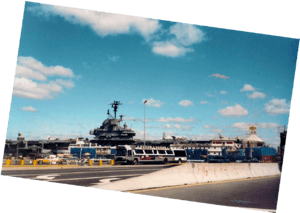 The museum opened in 1982 at Pier 86 after prominent New York real estate developers Zachary and Larry Fisher, and philanthropist and journalist Michael Stern saved USS Intrepid from scrapping in 1978. Intrepid became a National Historic Landmark in 1986.

On August 8, 1988, the museum was awarded USS Growler, a Grayback-class submarine, which carried nuclear Regulus missiles, by the United States Congress from the United States Navy. The submarine is on display after extensive renovations were performed in 2009.

USS Edson, a Forrest Sherman-class destroyer was displayed at the Intrepid museum from 1989 to 2004. The Edson was returned to the United States Navy, and is now on display at the Saginaw Valley Naval Ship Museum in Bay City, Michigan.

In 2001, Intrepid served as temporary field headquarters for the Federal Bureau of Investigation as it began its investigation of the September 11 attacks. 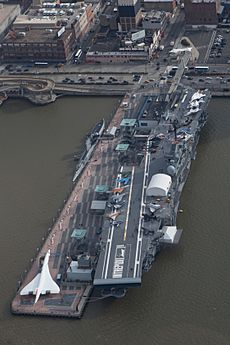 Aerial view of the museum from the Hudson River, 2011

On October 5, 2006, the museum closed for repairs and renovations to the ship and the pier. Intrepid was moved down the Hudson River by tugboat to The Peninsula at Bayonne Harbor, New York City (previously the Military Ocean Terminal) to undergo restoration.

The scheduled move was delayed on June 3, 2006, when the ship's propellers stuck in the thick Hudson River mud, preventing the tugboats from moving the ship out of her berth. A second successful attempt was made on July 4, 2006, after extensive dredging operations. The aircraft carrier was later floated to Yankee Island where her museum facilities were upgraded and expanded before returning to her renovated pier in Manhattan.

The carrier was towed back to Pier 86 on October 31, 2008, and reopened to the public on November 23. Additional aircraft are displayed on the flight and hangar decks and the British Airways Concorde was moved from a barge into an exhibit space on the pier. 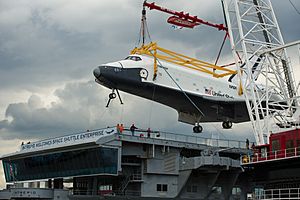 Enterprise being lowered onto Intrepid in 2012

On December 12, 2011, ownership of the Space Shuttle Enterprise was transferred to the Intrepid Sea, Air & Space Museum. In preparation for the relocation, engineers evaluated the vehicle in early 2010 and determined that it was safe to fly on the Shuttle Carrier Aircraft once again. On April 27, 2012, Enterprise was flown to JFK International Airport and then moved by barge to the Intrepid Museum on June 3, 2012.

To make room for the Enterprise display, three aircraft were transferred to the Empire State Aerosciences Museum near Schenectady, New York. These aircraft are a Douglas F3D Skyknight, a Royal Navy Supermarine Scimitar, and a MiG-15. 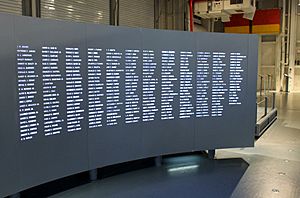 The Enterprise went on public display July 19, 2012, at the Intrepid Sea, Air & Space Museum's new Space Shuttle Pavilion. The exhibit was closed in October 2012 due to damage from Hurricane Sandy. The pavilion and exhibit reopened on July 10, 2013. 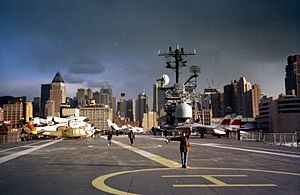 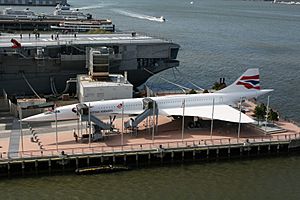 The museum serves as an event space for community and national events. For instance, it held concerts during the 2013 MLB All-Star Weekend, and 2014's Super Bowl XLVIII, where the museum docked cruise ship Norwegian Getaway, turned into the "Bud Light Hotel". The museum serves as a hub for the annual Fleet Week events. Visiting warships dock at the cruise ship terminals to the north, and events are held on the museum grounds and the deck of Intrepid.