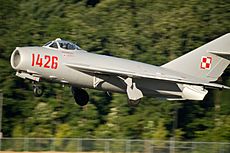 A silver MiG-17 taking off.

The MiG-17 Fresco is a fighter aircraft made by Mikoyan, a Russian company. It first flew in 1950, and was supposed to replace the MiG-15 in the Korean War, but it did not arrive fast enough. It was used by the North Vietnamese in the Vietnam War. It carried 3 guns on it, and later versions carried missiles. Today, it is used as a trainer in other air forces.

All content from Kiddle encyclopedia articles (including the article images and facts) can be freely used under Attribution-ShareAlike license, unless stated otherwise. Cite this article:
Mikoyan-Gurevich MiG-17 Facts for Kids. Kiddle Encyclopedia.