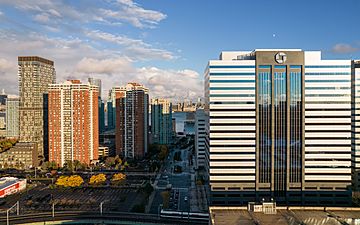 High-rises in Newport, showing a mix of residential and commercial buildings

Newport is a 600-acre (2.4 km2) master-planned, mixed-use community in Downtown Jersey City, New Jersey, United States, consisting of retail, residential, office, and entertainment facilities. The neighborhood is situated on the Hudson Waterfront on what had been the yards of Erie Railroad's Pavonia Terminal, located opposite Lower Manhattan and the neighborhood of Tribeca in New York City. Redevelopment of the neighborhood began in 1986 as a $10 billion project led by real-estate tycoon Samuel J. LeFrak and his firm The LeFrak Organization.

The Hudson-Bergen Light Rail's Newport station and the PATH's Newport station are located in Newport. The area is also served by several New Jersey Transit bus lines, A&C Bus Corporation as well as other private bus lines. Interstate 78 is nearby and connects to the Holland Tunnel, which provides vehicle access to lower Manhattan, as well as to the New Jersey Turnpike Extension.

The "Newport Office Center" consists of 8 buildings which in total amount to over 5,000,000 square feet (460,000 m2) of Class A commercial office space. The first of these buildings, 111 Town Square Place, was built from the remnants of an abandoned warehouse in 1989 and contains both office and data centers. The most recent building, 100 Town Square Place was completed in 2003. Hundreds of different companies have headquarters or back-offices at Newport. These range from transportation companies such as EVA Air and Jet Airways to major financial institutions such as JPMorgan Chase which fully occupies two entire buildings in the Newport Office Center.

The Newport 10,000, more popularly known as the Newport 10k, is a 10,000 meter road race (running) in the vicinity of the Hudson River Waterfront Walkway. Typically held the second weekend in May, the race tends to attract a strong regional and international field of elite runners. The course is a USATF certified and consists of flat local roads.

All content from Kiddle encyclopedia articles (including the article images and facts) can be freely used under Attribution-ShareAlike license, unless stated otherwise. Cite this article:
Newport, Jersey City Facts for Kids. Kiddle Encyclopedia.