Bloomfield Hills is a city located in Metro Detroit's northern suburbs in Oakland County in the U.S. state of Michigan, 20.2 miles (32.5 km) northwest of downtown Detroit. The city is almost completely surrounded by Bloomfield Township. As of the 2010 census, the city population was 3,869.

On June 28, 1820, Oakland County was divided into two townships: Pontiac Township and Bloomfield Township, the latter covering the southern part of the county that would include West Bloomfield Township, Royal Oak and Southfield. What is now Bloomfield Hills was a farming area until the turn of the 20th century when wealthy Detroit residents bought up the land. The settlement became a village in 1927, and in 1932 residents voted to become a city to avoid being incorporated into growing Birmingham. 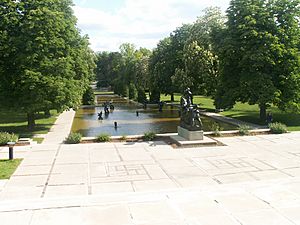 Bloomfield Hills is the location of the National Historic Landmark Cranbrook Educational Community and other historic sites listed on the national register of historic places.

In popular culture, Bloomfield Hills was the setting for the 2005 film The Upside of Anger. In the 2002 film 8 Mile, Eminem mentions Cranbrook Kingswood while making fun of "Doc" because he attended Cranbrook, which is not considered cool or impressive in the atmosphere portrayed in the film. Bloomfield Hills is the hometown of the comic book character, Trance. Some scenes in Out of Sight with Jennifer Lopez and George Clooney were filmed at a private residence in Bloomfield Hills. (In the novel by Elmore Leonard on which the film is based, the most prominent street in Bloomfield Hills is described as “Vaughan Road, nothing but money.”) Jimmy Hoffa was last seen at the former Machus Red Fox restaurant in adjacent Bloomfield Township. The novel Gilda Joyce: The Ladies of the Lake is set in a private school in Bloomfield. 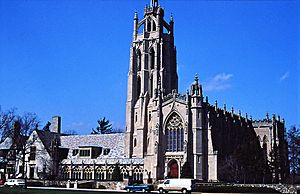 The area is the home of landmark churches including Kirk in the Hills Presbyterian on Long Lake Rd (Bloomfield Township) and Christ Church Cranbrook Episcopal, consecrated in 1928 as part of George Booth's plan for the Cranbrook Educational Community. The Congregational Church of Birmingham United Church of Christ was founded in Birmingham but moved to its present location in at 1000 Cranbrook Road (at Woodward Avenue) in Bloomfield Hills in 1966. St. Hugo of the Hills Roman Catholic Church' was funded by Theodore F. MacManus (1872–1940) and his wife in memory of their deceased children, Hugo and Hubert. St. Hugo of the Hills Catholic Church was built from 1931–1936, with approval from Bishop Michael J. Gallagher, and was designed by Arthur DesRossiers. Other churches include St. George Greek Orthodox, Bloomfield Hills Baptist, Beautiful Savior Lutheran Church (ELCA) on Adams Road (Bloomfield Township), Detroit Michigan Temple of The Church of Jesus Christ of Latter-day Saints, and Birmingham Unitarian Church on Woodward Avenue. 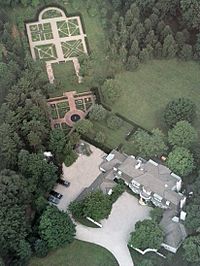 There were 1,489 households of which 25.7% had children under the age of 18 living with them, 67.7% were married couples living together, 4.9% had a female householder with no husband present, 2.4% had a male householder with no wife present, and 25.1% were non-families. 21.8% of all households were made up of individuals and 13% had someone living alone who was 65 years of age or older. The average household size was 2.44 and the average family size was 2.84.

All content from Kiddle encyclopedia articles (including the article images and facts) can be freely used under Attribution-ShareAlike license, unless stated otherwise. Cite this article:
Bloomfield Hills, Michigan Facts for Kids. Kiddle Encyclopedia.