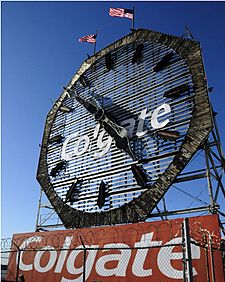 The Colgate Clock is an octagonal clock facing the Hudson River near Exchange Place in Jersey City, New Jersey. It has a diameter of 50 feet (15 m). It is currently situated 1,300 feet (400 m) south of where the headquarters of consumer products conglomerate Colgate-Palmolive used to be sited, before it left the area in 1985.

The Colgate Clock was once perched atop of at the Colgate plant at 85-99 Hudson Street in Jersey City, New Jersey. The current Colgate Clock was built in 1924 to replace an earlier clock designed by Colgate engineer Warren Davey, which was constructed by the Seth Thomas Clock Company for Colgate's centennial in 1906. After the current clock's construction, the earlier clock was relocated to a Colgate factory in Clarksville, Indiana. The Jersey City clock was maintained by John A. Winters from the 1930s until his retirement in 1976.

As of 2005, the Colgate Clock stands on an otherwise empty lot; all of the other buildings in the complex were demolished in 1985 when Colgate left. The lot is located on the Hudson River waterfront and the clock itself is 100 metres (330 ft) south of the Goldman Sachs Tower, formerly the tallest skyscraper in the state of New Jersey. The construction of that building in the early 2000s forced a relocation of the clock southward to its current location. At that time, the size of the Colgate advertisement attached to it was reduced to comply with the Hudson River No Billboard law. As a part of the relocation agreement Goldman Sachs now maintains the clock.

The clock is a mandatory reporting point for flights below Class B airspace in the Hudson River VFR corridor.

In 2013, the clock was refurbished, outfitted with LED lights, and reinstalled on the waterfront near the Goldman-Sachs tower.

All content from Kiddle encyclopedia articles (including the article images and facts) can be freely used under Attribution-ShareAlike license, unless stated otherwise. Cite this article:
Colgate Clock (Jersey City) Facts for Kids. Kiddle Encyclopedia.