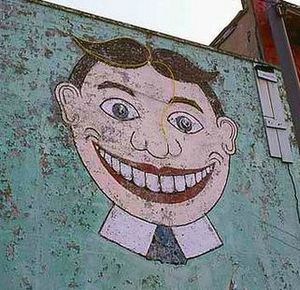 Tillie as painted on the Palace Amusements building

Tillie is the nickname of two murals of a grinning figure that were painted on the side of the Palace Amusements building in Asbury Park, New Jersey, United States. Tillie is an amusement park "fun face", painted over the winter of 1955-1956. The name Tillie is likely a nod to George C. Tilyou, the owner of Steeplechase Park in Coney Island, New York, which features similar grinning face signage.

Like many other boardwalk areas in the United States, such as Coney Island, New York, Asbury Park had fallen on hard times. Palace Amusements, built in 1888, closed in 1988, and the historic building fell into disrepair. When the Palace site was targeted for demolition and redevelopment, Asbury Park residents, Tillie fans, and Springsteen fans formed a grassroots effort to save Tillie, lobbying the state to block the demolition or at least remove the mural beforehand. The group was partially successful, as the left-side Tillie, as well as the "bumper girl" murals, were removed. The right-side Tillie was demolished. From June 8 to June 11, 2004, Save Tillie volunteers removed the mural from the Palace building. The building was demolished in July 2004. Tillie and other murals from the Palace building were to be incorporated into a new building on the site. The two wall sections with the Tillie mural are presently stored in Asbury Park, but the version on the Wonder Bar at Ocean Avenue is a replica.

All content from Kiddle encyclopedia articles (including the article images and facts) can be freely used under Attribution-ShareAlike license, unless stated otherwise. Cite this article:
Tillie (murals) Facts for Kids. Kiddle Encyclopedia.