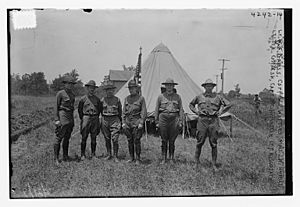 Fort Monmouth is a former installation of the Department of the Army in Monmouth County, New Jersey. The post is surrounded by the communities of Eatontown, Tinton Falls and Oceanport, New Jersey, and is located about 5 miles from the Atlantic Ocean. The post covers nearly 1,126 acres (4.56 km2) of land, from the Shrewsbury River on the east, to Route 35 on the west; this area is referred to as 'Main Post'. A separate area (Camp Charles Wood) to the west includes post housing, a golf course, and additional office and laboratory facilities. A rail line, owned by Conrail, runs through Camp Charles Wood and out to Naval Weapons Station Earle. The post is like a small town, including a Post Exchange (PX), health clinic, gas station and other amentities. Until the September 11, 2001 terrorist attacks the post was open to the public to drive through; after that time, the post was closed to all but authorized personnel.

The post was home to several units of the U.S. Army Materiel Command and offices of the Army Acquisition Executive (AAE) that research and manage Command and Control, Communications, Computing, Intelligence, Surveillance and Reconnaissance (C4ISR) capabilities and related technology, as well as an interservice organization designed to coordinate C4ISR, an academic preparatory school, an explosive ordnance disposal (EOD) unit, a garrison services unit, an Army health clinic, and a Veterans Administration health clinic. Other agencies, including the Federal Bureau of Investigation, Federal Emergency Management Agency and the National Security Agency, have presences on the post.

The post was selected for closure by the Base Realignment and Closure Commission in 2005. Most Army functions and personnel were required to be moved to Army facilities in Maryland—such as Aberdeen Proving Ground—and Ohio by 2011. The post officially closed on September 15, 2011.

However, it was temporarily reopened on December 2, 2012, for the evacuation of the borough of Paulsboro's residents to be temporarily resettled to the former Fort Monmouth until it is deemed safe for them to move back to Paulsboro, following a freight train derailment on November 30, 2012.

The installation began with the lease of a defunct Monmouth Park Racecourse (later re-opened at another site in 1946) by the Army for a training site for officers. The location near Eatontown, with rail sidings out of Hoboken and proximity to the port of Little Silver, was ideal. Known temporarily as Camp Little Silver, it was renamed Camp Alfred Vail shortly after in September 1917. The Chief Signal Officer authorized the purchase of Camp Vail in 1919. The Signal Corps School relocated to Camp Vail from Fort Leavenworth that year. The Signal Corps Board followed in 1924. In August 1925 the installation was granted permanent status and was renamed Fort Monmouth. It was named in honor of the soldiers of the American Revolutionary War who died in the Battle of Monmouth; aptly, it is also located in Monmouth County. The first permanent building was built in 1928. Other structures were built to house units the Army consolidated at Fort Monmouth.

In 1928 the first radio-equipped meteorological balloon reached the upper atmosphere, a forerunner of weather sounding techniques universally used today. In 1938 the U.S. Army's first radio-based aircraft detection and ranging system (later called radar) was developed on post. A production model of this equipment detected the oncoming Japanese air attack on Pearl Harbor, but the warning it provided was discounted. In 1946 celestial communication was proved feasible, when the radar developed by the Project Diana team was used to bounce radio signals off the moon.

During the late 20th century Fort Monmouth was home to the US Army Chaplain Center and School (USACHCS). Enlisted soldiers, non-commissioned officers (NCOs) and officers training to become Chaplain Assistants and Chaplains were trained at Fort Monmouth.

More communications units, including the Pigeon Breeding and Training Center, were consolidated into Fort Monmouth after the war ended. The pigeon service was discontinued in 1957; the birds were either sold at auction or donated to zoos.

The hysteria surrounding Fort Monmouth and the Rosenbergs was not limited to Julius and Ethel; others with the last name Rosenberg (or Kaplan) lost their security clearance for no reason other than sharing a name with communists.

Before its BRAC closing was announced, Fort Monmouth was the home to the CECOM Life Cycle Management Command (CECOM LCMC). CECOM LCMC was a lead command for the Army in the area of C4ISR development, acquisition and sustainment. Though no longer the home of the US Army Signal Corps (after its move to Fort Gordon, Georgia in the 1970s), Fort Monmouth is sometimes referred to as the "Soul of the Signal Corps". It housed the official Time capsule of the Army Signal Corps until June 21, 2010, when it was removed for relocation to the U.S. Army Signal Center & School at Fort Gordon, Georgia.

The post was home to the CECOM Life Cycle Management Command (CECOM LCMC), which consists of the following:

Most of the personnel located on the post are civilians employed by DoD, or employees of companies under contract with the DoD.

Fort Monmouth was also noted for its SunEagles Golf Course, one of the most prominent DoD golf courses in the nation.

Fort Monmouth was recommended for closure by the Pentagon in May 2005. BRAC voted in August 2005 to close the post; its decision was upheld by President George Bush and Congress. An appeal headed by U.S. Representatives Frank Pallone and Rush D. Holt, Jr. to remove the post from the list was made to the BRAC commission, but was rejected.

The DoD estimated the closure of Fort Monmouth would cause the loss of 9,737 jobs (5,272 direct and 4,465 indirect jobs) between 2006 and 2011, leading to a 0.8% increase in unemployment. DoD also calculated the closure and other changes would save it about $1 billion in the long run.

However, in June 2007, an investigation by the Asbury Park Press revealed that the projected cost of closing Fort Monmouth and moving its research functions to Aberdeen, Maryland, had doubled from $780 million to $1.5 billion. To this was to be added the $3.3 billion loss to New Jersey’s economy, coupled with the estimated $16 billion it would cost Maryland for needed infrastructure improvements to accommodate the largest job influx since World War II. In addition, recent Government Accountability Office (GAO) findings uncovered substantial errors in the Army estimation of BRAC cost savings—in one case turning a projected saving of $1 billion into one of just $31 million. In light of these issues, the House Armed Services Committee was to hold a hearing on the BRAC 2005 legislation.

FMERPA is no longer active following the creation of the Fort Monmouth Economic Revitalization Authority (FMERA) to provide investment, continuity and economic growth to the communities impacted by the federal government's decision to close Fort Monmouth. The bill was sponsored by Sen. Jennifer Beck (R-Monmouth) and Assembly members Joseph Cryan (D-Union), Albert Coutinho (D-Essex), Angel Fuentes (D-Camden), Annette Quijano (D-Union) and Upendra Chivukula (D-Somerset) and signed into law by Gov. Chris Christie Tuesday, August 17, 2010. FMERA was to advance FMERPA's Reuse and Redevelopment Plan for economic development, growth and planning, with a focus on technology-based industries, for the 1,126 acres of real estate at Fort Monmouth following the base closure in September 2011.

The authority holds meetings at their headquarters, located in the former Fort library in Oceanport.

As mandated by federal law, the authority must advertise for notices of interest from any state, county, municipal, or private, non-profit agency which would provide homeless assistance to Monmouth County residents.

All content from Kiddle encyclopedia articles (including the article images and facts) can be freely used under Attribution-ShareAlike license, unless stated otherwise. Cite this article:
Fort Monmouth Facts for Kids. Kiddle Encyclopedia.