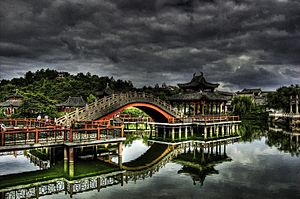 A movie studio, or film studio, is a place where movies are made. A movie studio can be an area where the movie is filmed; like an indoor (interior) stage or room, or an outdoor area in which only those making the movie are allowed to be.

All content from Kiddle encyclopedia articles (including the article images and facts) can be freely used under Attribution-ShareAlike license, unless stated otherwise. Cite this article:
Movie studio Facts for Kids. Kiddle Encyclopedia.