The borough was formed as New Shrewsbury by an act of the New Jersey Legislature on August 15, 1950, based on the results of a referendum held on July 18, 1950, after breaking away from Shrewsbury Township. It was renamed "Tinton Falls" in 1975, to avoid postal errors. The name came from Lewis Morris's plantation, Tinton Manor, which employed free white workers and slaves. The borough is home to the highest waterfall on New Jersey's coastal plain.

The area that is now known as Tinton Falls was originally settled in the late 1600s, probably beginning with the initial land purchases from the Lenni Lenape Native Americans in 1664. Water power and iron ore were likely the incentives that encouraged settlement: shortly after [the land was purchased], a man by the name of James Grover had an ironworks built along the river. Grover was likely the founder of the community, which, in the 1600s, was named "New Shrewsbury". At this time, the waterfall was known to be about 30 feet (9.1 m) high; erosion and the destruction of the dam near the ironworks have led to its diminishment.

Grover's ironworks was the central fixture of the community, and it was one of the oldest built in the country, predated only by buildings in Jamestown and Massachusetts. In 1675, a half-interest in the ironworks company was purchased by Colonel Lewis Morris, [who obtained a title granting him 3,540 acres (14.3 km2) along the Shrewsbury River]. Morris also obtained land owned by Bartholomew Applegate, who had built a corn mill on the other side of the river. Morris, who procured the land for iron mining, named his holdings "Tintern Manor," after his family lands in Monmouthshire, England. Tintern Abbey, located in Monmouthshire, Wales, is often accepted as the namesake of Tinton Falls. 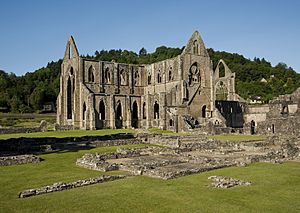 Tintern Abbey in Monmouthshire, Wales, is often accepted as the namesake of Tinton Falls.

In 1691, Colonel Morris died, leaving the ironworks and Tinton Manor (a corruption of "Tintern Manor") to his nephew of the same name. By 1714, the ironworks had become less profitable, but mention of a Tinton Falls ironworks can be found as late as 1844. Morris brought in dozens of African slaves to mine the ore resulting in the nickname the "Iron Plantation", with the highest number of slaves being in Tinton Falls at that time in the colony of New Jersey, though in mid-18th century it had the largest number of emancipated slaves in the 13 colonies, as residents followed the preaching of abolitionist John Woolman.

There were 8,355 households out of which 21.9% had children under the age of 18 living with them, 43.7% were married couples living together, 7.5% had a female householder with no husband present, and 46.6% were non-families. 42.3% of all households were made up of individuals, and 27.4% had someone living alone who was 65 years of age or older. The average household size was 2.11 and the average family size was 2.95.

There were 5,883 households, out of which 34.1% had children under the age of 18 living with them, 56.0% were married couples living together, 9.2% had a female householder with no husband present, and 32.4% were non-families. 27.2% of all households were made up of individuals, and 7.3% had someone living alone who was 65 years of age or older. The average household size was 2.51 and the average family size was 3.11.

Overlook by the Falls, located near the town's waterfalls (the namesake for the town), is a wildlife area where trails have been added to allow visitors to view the falls and the local fauna.

Shark River Park, the first included in the Monmouth County Park System when it was established in 1961, covers 961 acres (389 ha) along the Shark River in portions of Tinton Falls, Neptune Township and Wall Township. 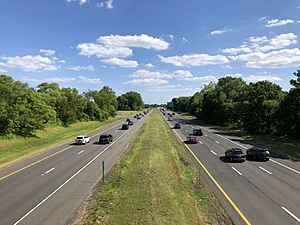 Major highways passing through Tinton Falls include the Garden State Parkway, Route 18, Route 33, and Route 66. Tinton Falls houses exits 100 (including the Monmouth Service Area), 102, 105, and 109 on the parkway, including a high-speed toll gate, and the southern start/end of the express and local carriageways, although the borough is listed only on signs for exit 105.

Major county roads that pass through Tinton Falls are CR 520 (Newman Springs Road, which crosses the northern portion of the borough), CR 537 (Tinton Avenue, which also crosses the northern portion of the borough from Colts Neck Township in the west to Eatontown in the east) and County Route 547 (Shafto Road), which enters from Wall Township at the borough's southwest corner and proceeds northeast towards Eatontown.

Other limited access road that are accessible outside the borough include Interstate 195 in neighboring Wall Township.

NJ Transit offers train service on the North Jersey Coast Line at the nearby Red Bank station. NJ Transit local bus service is available on the 836 and 838 routes. 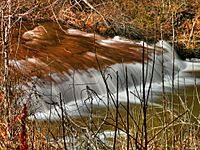 The waterfall of Tinton Falls

Jersey Shore Premium Outlets is an outdoor shopping mall that opened in November 2008 with 120 outlet stores and a food court, offering a gross leasable area of 435,000 square feet (40,400 m2).

The Tinton Falls Solar Farm is a 28.5-megawatt solar photovoltaic power plant covering 170 acres (69 ha), that contains 85,000 ground-mounted solar panels that has been the state's largest and was New Jersey's largest and one of the largest solar farms in the northeast United States at the time of its construction.

Public school students in kindergarten through eighth grade attend the three schools in the Tinton Falls School District, together with students from the neighboring community of Shrewsbury Township and the dependent children of military families based at Naval Weapons Station Earle. All three of the district's schools are located in Tinton Falls. Shrewsbury Township is represented with one seat out of nine on the district's board of education. As of the 2020–21 school year, the district, comprised of three schools, had an enrollment of 1,331 students and 153.4 classroom teachers (on an FTE basis), for a student–teacher ratio of 8.7:1. Schools in the district (with 2020–21 enrollment data from the National Center for Education Statistics) are Mahala F. Atchison Elementary School with 438 students in grades K-3, Swimming River Elementary School with 440 students in grades 4-5 and Tinton Falls Middle School with 446 students in grades 6-8.

Students in public school for ninth through twelfth grades attend Monmouth Regional High School, located in Tinton Falls. The school also serves students from Eatontown, Tinton Falls and Naval Weapons Station Earle. As of the 2020–21 school year, the high school had an enrollment of 953 students and 90.2 classroom teachers (on an FTE basis), for a student–teacher ratio of 10.6:1. Seats on the high school district's nine-member board of education are allocated based on the populations of the constituent municipalities, with five seats assigned to Tinton Falls.

Ranney School is a coeducational, nonsectarian K-12 private school founded in 1960; its campus occupies 60 acres (24 ha) off of Hope Road. Trinity Hall is an all-girls independent high school in the Catholic tradition, founded in 2013.

People who were born in, residents of, or otherwise closely associated with Tinton Falls include:

All content from Kiddle encyclopedia articles (including the article images and facts) can be freely used under Attribution-ShareAlike license, unless stated otherwise. Cite this article:
Tinton Falls, New Jersey Facts for Kids. Kiddle Encyclopedia.