Other unincorporated communities, localities and place names located partially or completely within the township include Cold Indian Springs, Colonial Terrace,

Deal Lake covers 158 acres (64 ha) and is overseen by the Deal Lake Commission, which was established in 1974. Seven municipalities border the lake, accounting for 27 miles (43 km) of shoreline, also including Allenhurst, Asbury Park, Deal, Interlaken, Loch Arbour and Neptune Township.

The township is bordered by Eatontown and West Long Branch on the north; Long Branch, Deal, Allenhurst and Interlaken on the east; Neptune and Asbury Park on the south; and Tinton Falls on the west.

Ocean Township maintains a membership-based pool and tennis club for residents, with the pool open during the summer from Memorial Day to Labor Day. 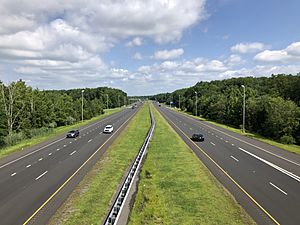 Ocean Township is accessible by several major roads. The Route 18 freeway traverses the western part while Route 35 passes through in the east. Route 66 runs along the southern border with Neptune and Route 71 straddles the eastern border with Deal and West Long Branch. The Garden State Parkway is located west of Ocean in neighboring Tinton Falls.

A brief stretch of NJ Transit's North Jersey Coast Line passes through in the east, but the closest stations are Allenhurst and Elberon.

NJ Transit provides local bus transportation on the 832 and 837 routes.

At the end of the 2016–17 school year, Loch Arbour left the district after receiving approval from the New Jersey Department of Education and following the overwhelming passage of a referendum; with 14 public school students and school property taxes of $2 million, Loch Arbour had been paying an average of $143,000 per pupil, which would be significantly reduced under new sending/receiving relationships established with the West Long Branch Public Schools for PreK-8 and Shore Regional High School for 9-12, under which Loch Arbour would pay tuition to each district based on the number of students.

People who were born in, residents of, or otherwise closely associated with Ocean Township include:

All content from Kiddle encyclopedia articles (including the article images and facts) can be freely used under Attribution-ShareAlike license, unless stated otherwise. Cite this article:
Ocean Township, Monmouth County, New Jersey Facts for Kids. Kiddle Encyclopedia.