Elberon is an unincorporated community that is part of Long Branch in Monmouth County, New Jersey, United States. The area is served as United States Postal Service ZIP code 07740.

Elberon derives its name from the name of one of its founders, L. B. Brown. 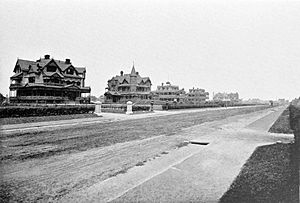 The Elberon station offers NJ Transit train service along the North Jersey Coast Line. It was listed on the National Register of Historic Places in 1978 (Reference #78001777). The original station burned down and was removed from the Register in 1990.

Elberon was a beach resort community in the late 18th century. In the 19th century it was a "Hollywood" of the east, where some of the greatest theatrical and other performers of the day gathered and performed. It was visited by presidents Chester A. Arthur, James Garfield, Ulysses S. Grant, Benjamin Harrison, Rutherford B. Hayes, William McKinley, and Woodrow Wilson. Seven Presidents Park, a park near the beach, is named in honor of their visits.

The Church of the Presidents, where all seven worshiped, is the only structure left in Long Branch associated with them. The church was built in 1879, designed by New York architects William Appleton Potter and Robert Henderson Robertson.

President James A. Garfield was brought to Long Branch in the hope that the fresh air and quiet in Elberon might aid his recovery after being shot on July 2, 1881, an incident that left the assassin's bullet encysted behind the pancreas. He died here on September 19, 1881, exactly two months before his 50th birthday. The Garfield Tea House, built from railroad ties that carried Garfield's train, is in Elberon.

People who were born in, residents of, or otherwise closely associated with Elberon include:

All content from Kiddle encyclopedia articles (including the article images and facts) can be freely used under Attribution-ShareAlike license, unless stated otherwise. Cite this article:
Elberon, New Jersey Facts for Kids. Kiddle Encyclopedia.