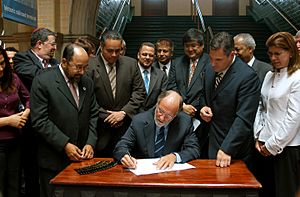 Corzine was born in central Illinoisand grew up on a small family farm in Willey Station, Illinois, and near Taylorville. After completing high school at Taylorville High School, where he had been the football quarterback and basketball captain, he attended the University of Illinois at Urbana–Champaign, where he was a member of the Phi Delta Theta fraternity, and graduated in 1969, earning Phi Beta Kappa honors.

While in college, he enlisted in the United States Marine Corps Reserve and served from 1969 until 1975, attaining the rank of sergeant. In 1970 he enrolled in the University of Chicago Booth School of Business, from which he received a Master of Business Administration degree in 1973.

His first business experience was in the bond department of Continental Illinois National Bank, where he worked days while attending the Booth School of Business MBA program at night. He then moved to BancOhio National Bank, a regional bank in Columbus, Ohio, that was acquired in 1984 by National City Bank. Corzine worked at BancOhio until 1975 when he moved his family to New Jersey and was hired as a bond trader for Goldman Sachs. 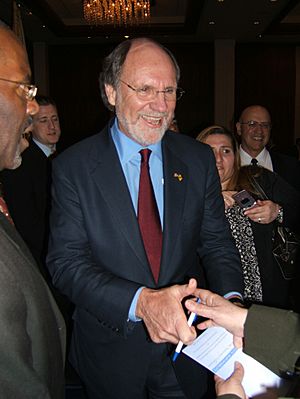 Corzine married his high school sweetheart, Joanne Dougherty, in 1969 at the age of 22, and their 33-year marriage produced three children. The couple separated in 2002 and were divorced in November 2003. Corzine had lived with his wife in Summit, New Jersey. After their separation, Corzine moved to a condominium apartment in Hoboken.

In April 2010, The Huffington Post announced the engagement of Corzine and psychotherapist Sharon Elghanayan (née Levine), whom he had been dating since 2004. On November 23, 2010, Corzine married Elghanayan in a ceremony presided over by Chief Justice of the New Jersey Supreme Court Stuart Rabner, according to an announcement in The New York Times.

All content from Kiddle encyclopedia articles (including the article images and facts) can be freely used under Attribution-ShareAlike license, unless stated otherwise. Cite this article:
Jon Corzine Facts for Kids. Kiddle Encyclopedia.