Taylorville is a city in and the county seat of Christian County, Illinois, United States. The population was 11,427 at the 2000 census, making it the county's largest city. 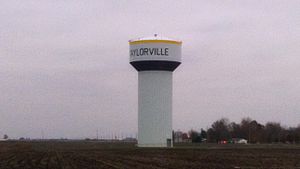 Around 11:20AM on August 11, 2012, a twin engine airplane crashed into a residential area of Taylorville, killing the pilot but injuring none on the ground.

Some outer homes and a business in Taylorville were damaged by a F1 tornado on April 2, 2006.

The town newspaper is the Breeze-Courier, which is the only daily newspaper serving Christian County. Also, The State Journal-Register, published in Springfield, Illinois covers Taylorville and Christian County quite extensively. The Decatur, Illinois Herald & Review covers the area as well.

Taylorville was known (in the early to mid-1990s) to have had a high rate of neuroblastoma, a cancer affecting the adrenal gland and striking children. The local power company Central Illinois Public Service Company was sued and lost for contaminating the groundwater in 1994.

The IHSA single season boys' basketball record of 45–0 was set by Taylorville High School in 1944. Ron Bontemps and Johnny Orr were team members.

In 1911, the Taylorville Christians were a member of the Illinois–Missouri League, an American minor league baseball league. Future Baseball Hall of Famer Ray Schalk played on that team.

Taylorville is known as the "Christmas Capital of Illinois."

All content from Kiddle encyclopedia articles (including the article images and facts) can be freely used under Attribution-ShareAlike license, unless stated otherwise. Cite this article:
Taylorville, Illinois Facts for Kids. Kiddle Encyclopedia.