Jacksonville was established by European Americans on a 160-acre tract of land in the center of Morgan County in 1825, two years after the county was founded. The town grew at a rapid rate, and a town square was quickly developed. In 1829, the Presbyterian Reverend John M. Ellis worked to found a new "seminary of learning" in the new state of Illinois. A group of Congregational students at Yale University heard about his plans and headed westward to establish the new school. These students were a part of the famous "Yale Bands," groups of students who established several colleges in the frontier, what is now the Midwest. Illinois College was one of the first institutions of higher learning in the Midwest.

The college stimulated the growth of Jacksonville. A new courthouse was built on the square, churches were constructed, railroads were planned, and stores and taverns were built. By 1834, Jacksonville had the largest population of any city in the state of Illinois, outnumbering Chicago. In the 1830s, the town was on the path of Native Americans who were being forcibly removed by the federal government to west of the Mississippi. The Potawatomi passed through here in 1838 on what they called their Trail of Death as they were forced from their traditional homelands to the dry and barren Indian Territory to the west.

Jacksonville's education complex and standing in the state was developed by the establishment of state institutions: the Illinois School for the Deaf and the Illinois School for the Visually Impaired. The Illinois Conference Female Academy was founded for education for girls; it later developed as MacMurray College. By 1850, Illinois College had issued Illinois' first college degrees and opened the first medical school in the state. Because of this, Jacksonville earned the nickname of "Athens of the West."

In 1851, Illinois opened its first state mental hospital in Jacksonville; it became a major employer for the area. Now named the Jacksonville Developmental Center, this facility serves developmentally challenged individuals.

The attorney Abraham Lincoln occasionally had legal business in Jacksonville, frequently acting either as co-counsel or opposing counsel with David A. Smith, a Jacksonville resident. In what is now Central Park Plaza, Lincoln delivered a strong antislavery speech on September 6, 1856 in support of the presidential campaign of John C. Frémont, lasting over two hours. A mural depicting the event has been painted on the side of a building at the southwest corner of the Park. During the antebellum years, Jacksonville was a major stopping point on the historic Underground Railroad, as refugee slaves moved north to freedom, many going into Canada.

The city has an annual commemoration of the Civil War, with a reenactment named for the late Jacksonville resident U.S. Army General Benjamin Grierson.

In 1911 as part of the progressive movement, Jacksonville adopted the city commission form of government, the first mayor being George W. Davis.

In the summer of 1965, in order to keep up with customer demand for records by the Beatles, the wildly popular English band, Capitol Records opened a vinyl record pressing plant on the western outskirts of Jacksonville, at 1 Capitol Way. The plant produced a number of highly collectible pressings. This plant eventually served the Capitol Records Club, producing vinyl LPs and later audiocassettes, CDs, and DVDs of a number of artists.

At its peak, operating as EMI Records (owner of Capitol), the plant employed over 1,000 workers. It was a significant location in the music industry. For example, all seven albums released by country western artist Garth Brooks sold more than 50 million copies. EMI held a "thank-you" luncheon for 1,000 workers at the Jacksonville plant on March 10, 1995. A decade later, EMI ceased manufacturing operations at Jacksonville in 2004.

The city sits in the middle of mostly flat, fertile farmland. Mauvaisterre Creek, a small brook, runs through the middle of the city and empties into Lake Mauvaisterre, a small reservoir surrounded on three sides by parkland. Just to the south of the city lies Lake Jacksonville, a 476-acre lake with 18.6 miles of shoreline. Lake Jacksonville was named the Number One Fishing Spot in Illinois by Field and Stream Magazine. 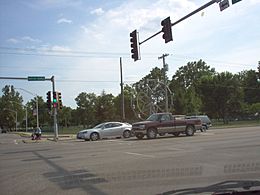 Jacksonville is the home of the Eli Bridge Company, manufacturer of Ferris wheels and other amusement rides such as the Scrambler. W.E. Sullivan founded the firm with the introduction of his first portable "Big Eli" Wheel on the Jacksonville Square on May 23, 1900. Jacksonville was once home to the J. Capps & Son Company, one of the largest manufacturers of textiles and clothing in the United States, and owned by the Capps family, which was intermarried with the family of Jacob Bunn and John Whitfield Bunn of Springfield, Illinois, and Chicago.

Bound to Stay Bound is a prime book Processing company and is located in Jacksonville, they developed the process of prebinding children's books in the 1920s to make them more durable for use in schools and public libraries.

In 2005, Sufjan Stevens released Illinois, a concept album making reference to various people and places associated with the state. Its fifth track, "Jacksonville," refers to various landmarks in the town, such as Nichols Park. It also contains a story about A. W. Jackson, a "colored preacher" urban legend supposes the town is named after, as well as President Andrew Jackson (President from 1829–1837) after whom the town's officials say it is actually named.

The Grammy-winning album Stones in the Road by singer-songwriter Mary Chapin Carpenter features the song "John Doe #24" that describes a series of events that occurred in Jacksonville relating to the person on whose life the song is based. The song tells the story of a blind and deaf man who was found wandering the streets in Jacksonville in 1945. The man was hospitalized for diabetes and kept in various institutions until he died nearly 50 years later in 1993. During his 48 years of institutionalization, nobody ever found out his name, nor did anyone who knew or was related to him come to Jacksonville to establish his identity. It was speculated that he was originally from New Orleans, but this was never verified. Likewise, how he came to Jacksonville remains a mystery to this day.

Cultural offerings include the Jacksonville Symphony Orchestra, the Jacksonville Theatre Guild, the Art Association of Jacksonville and its David Strawn Art Gallery, as well as many public events and activities hosted by MacMurray College and Illinois College. Recent additions to the cultural scene include the Imagine Foundation and the Eclectic art gallery, both located in the city's downtown.

Jacksonville also holds the unusual distinction of having a large number of pipe organs for a city of its size - eleven in all - found at various local churches, as well as both of its four-year colleges. 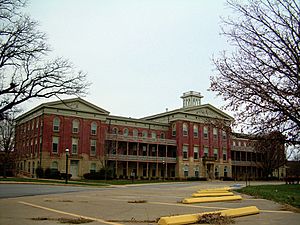 Illinois School for the Deaf

Jacksonville is home to one private four-year college, Illinois College. Illinois College is the second oldest college in Illinois, founded in 1829 (and the first to grant a degree – 1835) by one of the famous Yale Bands—students from Yale College who traveled westward to found new colleges. It briefly served as the state's first medical school from 1843 to 1848, and became co-educational in 1903. Beecher Hall, the first college building erected in Illinois, is named after its first president,Edward Beecher, brother to Henry Ward Beecher and Harriet Beecher Stowe. Jacksonville was also the home of the now-closed private four-year college, MacMurray College from 1846 to 2020.

All content from Kiddle encyclopedia articles (including the article images and facts) can be freely used under Attribution-ShareAlike license, unless stated otherwise. Cite this article:
Jacksonville, Illinois Facts for Kids. Kiddle Encyclopedia.