Macomb is a city in and the county seat of McDonough County, Illinois, United States. It is situated in western Illinois, southwest of Galesburg. The city is about 75 miles (121 km) southwest of Peoria and 77 miles (124 km) south of the Quad Cities. A special census held in 2014 placed the city's population at 21,516. Macomb is the home of Western Illinois University. 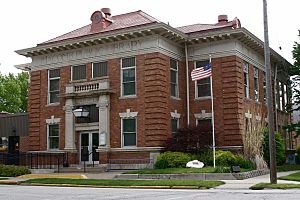 First settled in 1829 on a site tentatively named Washington, the town was officially founded in 1830 as the county seat of McDonough County and given the name Macomb after General Alexander Macomb, a general in the War of 1812. War veterans were given land grants in the Macomb area, which was part of the "Military Tract" set aside by Congress. In 1855 the Northern Cross Railroad, a predecessor to the Chicago, Burlington and Quincy Railroad, was constructed through Macomb, leading to a rise in the town's population. In 1899 the Western Illinois State Normal School, later Western Illinois University, was founded in Macomb. Representative Lawrence Sherman was instrumental in locating the school in Macomb. In 1903 the Macomb and Western Illinois Railway was built from Macomb to nearby Industry and Littleton by local financier Charles V. Chandler, though this railroad was abandoned in 1930. In 1918, construction on Illinois Route 3 was begun as a state financed highway from Cairo to Rock Island through Macomb; in the late 1920s U.S. Route 67 was extended along this route to Dubuque, Iowa.

Macomb has been visited by several US Presidents over the years. Ulysses S. Grant, Andrew Johnson, Rutherford B. Hayes, William McKinley and Theodore Roosevelt have all made short addresses in Macomb. On two occasions, Abraham Lincoln and Barack Obama addressed large audiences prior to their election as president. Obama was actually stumping for state senate at the time, meaning a president or presidential nominee has not visited Macomb in 109 years and counting.

Macomb was home to the St. Louis Rams' football summer training camp from 1996-2004. In 2005, the Rams decided to move summer training to their own facilities in St. Louis, Missouri, ending the nine-year relationship. 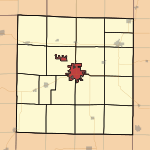 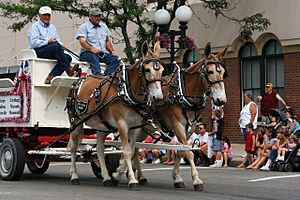 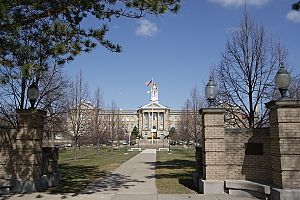 All content from Kiddle encyclopedia articles (including the article images and facts) can be freely used under Attribution-ShareAlike license, unless stated otherwise. Cite this article:
Macomb, Illinois Facts for Kids. Kiddle Encyclopedia.