Farming and other agricultural uses have been primary uses of land in the area since the time that the township was first formed. The township has 6,000 acres (2,400 ha) of land protected from development as part of a Farmland Preservation Program. Voters were the first in the county to approve a dedicated portion of property taxes to fund farmland preservation, which was increased by a 2001 referendum to four cents per $100 of assessed value, split between farmland preservation and the costs associated with purchasing and developing land for recreational uses.

The Assunpink Wildlife Preservation Area, of which more than 2,500 acres (1,000 ha) of the preserve's 6,300 acres (2,500 ha) are located in the township, as well as in portions of Millstone Township, Roosevelt and Robbinsville Township, offers wetlands and lakes for viewing migratory birds, in addition to mountain biking trails, bridle paths and hiking trails, operated under the supervision of the New Jersey Department of Environmental Protection Division of Fish and Wildlife.

There were 2,363 households out of which 38.1% had children under the age of 18 living with them, 76.5% were married couples living together, 4.9% had a female householder with no husband present, and 16.3% were non-families. 12.6% of all households were made up of individuals, and 6.1% had someone living alone who was 65 years of age or older. The average household size was 2.92 and the average family size was 3.19.

There were 1,437 households, out of which 42.7% had children under the age of 18 living with them, 74.7% were married couples living together, 5.5% had a female householder with no husband present, and 16.6% were non-families. 11.7% of all households were made up of individuals, and 5.2% had someone living alone who was 65 years of age or older. The average household size was 2.96 and the average family size was 3.24.

The Horse Park of New Jersey was conceived by equestrian enthusiasts concerned about the dwindling amount of land dedicated to their interests and activities. The Horse Park opened in 1987 on land initially purchased by the New Jersey Department of Environmental Protection with Green Acres funds, based on the input of the state's Equine Advisory Board, and is centrally located in Monmouth County's equine-oriented countryside.

Monmouth County parks in the township include Clayton Park, a passive recreation area with woodlands and hiking trails covering a total of 438 acres (177 ha) of land that dates back to a purchase of land in 1978 from an area farmer who sold the land to the county below market value to ensure that the land would be preserved.

Historic Walnford includes a restored Georgian style house, working mill, carriage house and cow barn that were all part of an industrial community dating back almost 200 years that was developed by the Waln family on a site that covers 38 acres (15 ha). The Crosswicks Creek Greenbelt includes 328 acres (133 ha) of land in the township, as part of a corridor running along the Crosswicks Creek from Fort Dix in Burlington County towards the Delaware River along the border between Burlington and Mercer County, traveling through Upper Freehold Township and including Historic Walnford.

A bond ordinance passed in 2000 provides for the development of soccer fields, baseball fields and basketball courts at the Byron Johnson Recreation Area and other township parks. The Byron Johnson site adjoins Allentown High School near the Allentown border, and is owned by Monmouth County and administered by the township, developed using municipal funds and monies contributed by developers. 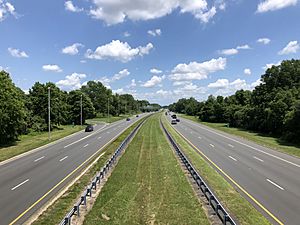 I-195 in Upper Freehold Township

A 5.7-mile (9.2 km) portion of the Central Jersey Expressway (Interstate 195) goes through Upper Freehold, making it an important artery for residents of the township. Exit 11 leads to the Horse Park of New Jersey. Exit 8 leads to County Route 539 (Hornerstown Road / Trenton-Forked River Road / Davis-Allentown Road) to Hightstown, or towards the Garden State Parkway south to Atlantic City. County Route 524 (called Yardville-Allentown Road / South Main Street where it enters Allentown / Stage Coach Road) heads across the township, mostly to the north of Interstate 195, from Hamilton Township in Mercer County to the east and Millstone Township to the west. County Route 526 (Walker Avenue) heads from Allentown in the east to Millstone Township in the west, paralleling Interstate 195 to the north. County Route 537 (Monmouth Road) runs for 6.5 miles (10.5 km) along the township's southern borders with the Ocean County municipalities of Plumsted Township and Jackson Township.

In addition, Interstate 95 (the New Jersey Turnpike) is minutes away along I-195 in neighboring Robbinsville Township (Exit 7A) and not too far also in bordering East Windsor (Exit 8).

The Cream Ridge Winery is located in the township.

Students in public school for pre-kindergarten through twelfth grade attend the Upper Freehold Regional School District, which serves students from Allentown Borough and Upper Freehold Township. Millstone Township sends students to the district's high school as part of a sending/receiving relationship with the Millstone Township Schools. As of the 2017–18 school year, the district, comprised of three schools, had an enrollment of 2,300 students and 196.1 classroom teachers (on an FTE basis), for a student–teacher ratio of 11.7:1. Schools in the district (with 2017–18 enrollment data from the National Center for Education Statistics) are Newell Elementary School with 513 students in pre-kindergarten through 4th grade, Stone Bridge Middle School with 518 students in grades 5 - 8 and Allentown High School with 1,245 students in grades 9 - 12. The operations of the district are overseen by a nine-member board of education, with the board's trustees elected directly by voters to serve three-year terms of office on a staggered basis, with three seats up for election each year. The nine seats are allocated to the two constituent municipalities based on population, with five assigned to Upper Freehold Township and four to Allentown.

People who were born in, residents of, or otherwise closely associated with Upper Freehold Township include:

All content from Kiddle encyclopedia articles (including the article images and facts) can be freely used under Attribution-ShareAlike license, unless stated otherwise. Cite this article:
Upper Freehold Township, New Jersey Facts for Kids. Kiddle Encyclopedia.