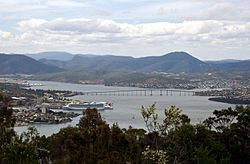 Looking up the River Derwent from Mount Nelson; Monmouth is on the other (east) side of the river; Buckingham is on the near (west) side.

It includes the parts of Greater Hobart which are located to the east of the Derwent, such as Rosny Park and Bridgewater. It also includes Kempton and Hamilton.

Eighth, The County of Monmouth, bounded on the north by Somersetshire; on the west by a portion of the Clyde to its junction with the Derwent, and thence on the south west by the Derwent to Storm bay; on the south by Storm bay and Frederick Henry bay; on the east by Pittwater and by the eastern boundaries of the parishes of Ulva, Staffa and Ormaig, and thence by a line to the junction of Beamont's rivulet with Little Swan port river. This county to include Betsey island and the Iron pot island.

All content from Kiddle encyclopedia articles (including the article images and facts) can be freely used under Attribution-ShareAlike license, unless stated otherwise. Cite this article:
Monmouth Land District Facts for Kids. Kiddle Encyclopedia.