Englishtown was incorporated as a borough by an act of the New Jersey Legislature on January 4, 1888, from portions of Manalapan Township, based on the results of a referendum held the previous day. The borough was named for James English, an early settler.

At the Battle of Monmouth, an American Revolutionary War battle fought on June 28, 1778 in Monmouth County, American General Charles Lee led the advance and initiated the first attack on the column's rear. When the British turned to flank him, he ordered a general retreat without so as much as firing a shot at the enemy, and his soldiers soon became disorganized. General George Washington continued the battle, earning respect for the Continental Army troops under his command. In the dining room of the Village Inn, located in the center of Englishtown, General Washington and Lord Stirling drew up the court martial papers citing Lee for his conduct during and after the battle.

There were 621 households out of which 40.6% had children under the age of 18 living with them, 55.1% were married couples living together, 14.3% had a female householder with no husband present, and 26.2% were non-families. 20.5% of all households were made up of individuals, and 5.3% had someone living alone who was 65 years of age or older. The average household size was 2.84 and the average family size was 3.33.

There were 643 households, out of which 39.5% had children under the age of 18 living with them, 51.8% were married couples living together, 10.0% had a female householder with no husband present, and 35.3% were non-families. 28.5% of all households were made up of individuals, and 14.3% had someone living alone who was 65 years of age or older. The average household size was 2.74 and the average family size was 3.51. 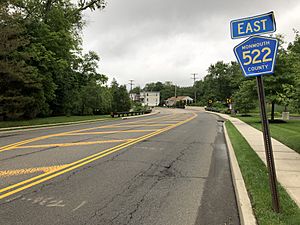 In the 19th & 20th centuries, Englishtown Borough and Manalapan Township had a major railway in the area, which was the Freehold and Jamesburg Agricultural Railroad. This railway was owned and operated by the Camden & Amboy Railroad Company (C&A), in which surveying for the line began on September 8, 1851, grading began on October 19, 1852, and the first track was laid on April 4, 1853. The first section of line was opened on July 18, 1853. The establishment of the Freehold & Jamesburg Agricultural Railroad allowed this region to become a transportation hub. The Freehold and Jamesburg Railroad was abandoned by the early 1930s. A 2.8-mile long (4.5 km) portion of the former railroad's right-of-way was later approved to be sold by the New Jersey Board of Public Utility Commissioners (PUC) to Jersey Central Power & Light Company in 1966, with occasional freight service still being utilized through the Freehold Industrial Track.

NJ Transit offers bus service between Englishtown and the Port Authority Bus Terminal in Midtown Manhattan, which is available on the 139 route.

Students from Englishtown in public school for ninth through twelfth grades attend Manalapan High School as part of the Freehold Regional High School District (FRHSD). The Freehold Regional High School District also serves students from Colts Neck Township, Englishtown, Farmingdale, Freehold Borough, Freehold Township, Howell Township and Marlboro Township. As of the 2019–20 school year, Manalapan High School had an enrollment of 1,879 students and 122.8 classroom teachers (on an FTE basis), for a student–teacher ratio of 15.3:1. Students may apply to attend one of the district's six specialized learning centers, including the Science and Engineering Learning Center hosted at Manalapan High School. The FRHSD board of education has nine members, who are elected to three-year terms from each of the constituent districts. Each member is allocated a fraction of a vote that totals to nine points, with Englishtown allocated one member, who has 0.5 votes.

People who were born in, residents of, or otherwise closely associated with Englishtown include:

All content from Kiddle encyclopedia articles (including the article images and facts) can be freely used under Attribution-ShareAlike license, unless stated otherwise. Cite this article:
Englishtown, New Jersey Facts for Kids. Kiddle Encyclopedia.