The name "Manalapan" is derived from a word in the Lenape language that would mean either "land of good bread", "good land to settle upon", "good bread" or "covered swamp with edible roots".

The Battle of Monmouth was fought in 1778 on land that is now part of Manalapan and Freehold townships. Monmouth Battlefield State Park occupies 2,928 acres (1,185 ha) in the two townships.

Yorketown (with a 2010 Census population of 6,535) is an unincorporated community and census-designated place (CDP) located within Manalapan Township. 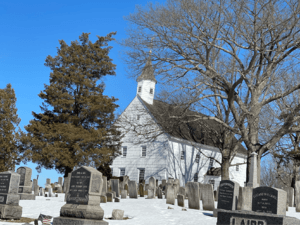 Tennent Presbyterian Church and cemetery in the historic village of Tennent

There were 13,263 households out of which 39.6% had children under the age of 18 living with them, 70.2% were married couples living together, 7.4% had a female householder with no husband present, and 19.6% were non-families. 17.3% of all households were made up of individuals, and 9.9% had someone living alone who was 65 years of age or older. The average household size was 2.92 and the average family size was 3.32. 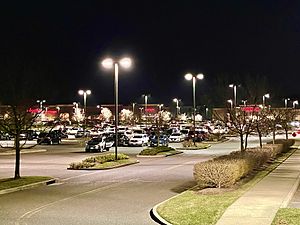 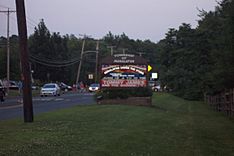 Manalapan Under the Stars in 2010

Manalapan landmarks include the headquarters facility of the Monmouth County Library, the Manalapan Recreation Center, and the battlefield for the Battle of Monmouth. Manalapan Under the Stars, the township's community celebration featuring rides, concerts, fireworks, and other activities, is held annually at the Recreation Center. Performers featured in the series have included Herman's Hermits Starring Peter Noone and Tommy James and the Shondells.

Manalapan was rated the second-hottest town on the East Coast by Money magazine.

Englishtown-Manalapan First Aid Squad (EMFAS) is a regional pre-hospital emergency care service for Englishtown and Manalapan residents. The organization was founded in 1941, and is located in Englishtown. 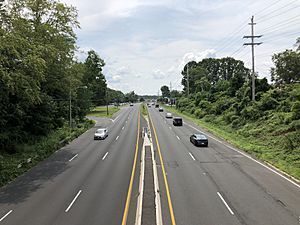 US 9 in Manalapan Township

Manalapan hosts U.S. Route 9 in the northeast, and State Route 33 passes through near the southern part of the township. Major county routes, such as 522 and 527 traverse through the municipality, while 524 and 537 goes along the southeast border of the township.

In the 19th & 20th centuries, Englishtown Borough and Manalapan Township had a major railway in the area, which was the Freehold and Jamesburg Agricultural Railroad. This railway was owned and operated by the Camden & Amboy Railroad Company (C&A), in which surveying for the line began on September 8, 1851, grading began on October 19, 1852, and the first track was laid on April 4, 1853. The first section of line was opened on July 18, 1853. The establishment of the Freehold & Jamesburg Agricultural Railroad allowed this region to become a transportation hub. The Freehold and Jamesburg Railroad was abandoned by the early 1930s. A 2.8-mile long (4.5 km) portion of the former railroad's right-of-way was later approved to be sold by the New Jersey Board of Public Utility Commissioners (PUC) to Jersey Central Power & Light Company in 1966, with occasional freight service still being utilized through the Freehold Industrial Track.

The Monmouth Ocean Middlesex Line is a proposal by New Jersey Transit to restore passenger railway service to the region. The township would be a potential stop for the 'MOM' Line.

As of now, the nearest train stations to the township are Metropark in Iselin, Metuchen, New Brunswick, and Princeton Junction on the Northeast Corridor Line.

NJ Transit currently provides bus service on the 139 route to the Port Authority Bus Terminal in Midtown Manhattan, to Newark and Jersey City on the 64 and 67 routes, and local service on the 307 route.

Public high school students in Manalapan and all of Monmouth County also have the option of attending one of the Monmouth County Vocational School District's five career academies. Manalapan’s academy is the Science and Engineering Program.

People who were born in, residents of, or otherwise closely associated with Manalapan Township include:

All content from Kiddle encyclopedia articles (including the article images and facts) can be freely used under Attribution-ShareAlike license, unless stated otherwise. Cite this article:
Manalapan Township, New Jersey Facts for Kids. Kiddle Encyclopedia.