Located at the cross-roads between the Delaware Valley region to the south and the Raritan Valley region to the north in the center of the state, the borough was established as Jersey Homesteads by an act of the New Jersey Legislature on May 29, 1937, from portions of Millstone Township. The name was changed to Roosevelt as of November 9, 1945, based on the results of a referendum held three days earlier, in honor of Franklin D. Roosevelt, who had died on April 12, 1945.

New Jersey Monthly magazine ranked Roosevelt as its 12th best place to live in its 2008 rankings of the "Best Places To Live" in New Jersey. 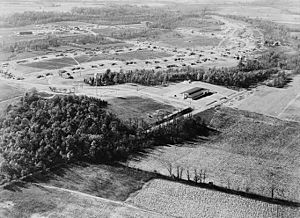 Roosevelt was originally called Jersey Homesteads, and was created during the Great Depression as part of President Roosevelt's New Deal, its main purpose being to resettle Jewish garment workers. The town was conceived as an integrated cooperative project, with farming, manufacturing, and retail all on a cooperative basis. The project fell under the discretion of the Resettlement Administration, but was conceived and largely planned out by Benjamin Brown.

Farmland in Central Jersey was purchased by Jersey Homesteads, Inc., a corporation owned by the federal government but under control of a board of directors selected by Brown. Construction started around 1936. Soon after there were 200 homes and various public facilities in place. The economy of the town consisted of a garment factory and a farm. Objectives of the community were to help residents escape poverty, to show that cooperative management can work, and as an experiment in government intervention.

Albert Einstein gave the town his political and moral support. Artist Ben Shahn lived in the town and painted a fresco mural viewable in the current Roosevelt Public School. The three panels show the history of the Jersey Homesteads, starting with the eastern European origins of its Jewish residents, their passage through Ellis Island and making plans for the community in Roosevelt.

David Dubinsky and the International Ladies' Garment Workers' Union opposed the project, arguing that the factory town would cause unions to lose their power over wages. Political opposition came from those who thought too much money was being spent on the project, as well as those opposed to the New Deal in general.

The Jersey Homesteads cooperative didn't last through World War II. It failed for a number of reasons. 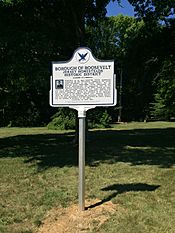 There were 314 households out of which 31.8% had children under the age of 18 living with them, 65.9% were married couples living together, 6.1% had a female householder with no husband present, and 23.2% were non-families. 17.5% of all households were made up of individuals, and 9.6% had someone living alone who was 65 years of age or older. The average household size was 2.81 and the average family size was 3.22.

There were 337 households, out of which 39.5% had children under the age of 18 living with them, 64.1% were married couples living together, 7.7% had a female householder with no husband present, and 23.4% were non-families. 18.7% of all households were made up of individuals, and 11.3% had someone living alone who was 65 years of age or older. The average household size was 2.77 and the average family size was 3.17.

The only major road that passes through is CR 571 in the center of the borough.

Interstate 195 is accessible in both of its neighboring towns and Interstate 95 (the New Jersey Turnpike) is also nearby.

The Roosevelt Public School District serves public school students in pre-kindergarten through fifth grade at Roosevelt Public School. As of the 2018–19 school year, the district, comprised of one school, had an enrollment of 83 students and 9.5 classroom teachers (on an FTE basis), for a student–teacher ratio of 8.7:1. In the 2016–17 school year, Roosevelt had the 6th-smallest enrollment of any school district in the state, with 88 students.

For sixth through twelfth grades, public school students attend the East Windsor Regional School District, which serves students from East Windsor Township and Hightstown Borough, with students from Roosevelt attending as part of a sending/receiving relationship. Schools in the East Windsor district attended by Roosevelt students (with 2018–19 enrollment data from the National Center for Education Statistics) are Melvin H. Kreps Middle School with 1,230 students in grades 6 - 8 and Hightstown High School with 1,676 students in grades 9 - 12.

From 2005 to 2010, a Jewish secondary and post-secondary religious school, Yeshiva Me'on Hatorah, was located in a local synagogue, Congregation Anshei Roosevelt. Due to unresolvable zoning issues for its dormitory and dining facilities, and local opposition to its presence, the yeshiva relocated to Monsey, New York after the yeshiva brought and lost several actions against the borough and certain individual borough officials in state and Federal courts.

People who were born in, residents of, or otherwise closely associated with Roosevelt include:

All content from Kiddle encyclopedia articles (including the article images and facts) can be freely used under Attribution-ShareAlike license, unless stated otherwise. Cite this article:
Roosevelt, New Jersey Facts for Kids. Kiddle Encyclopedia.