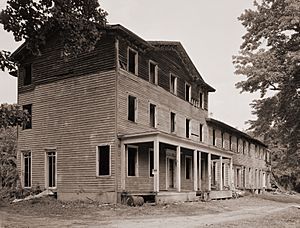 Main residence of the North American Phalanx as it appeared in August 1972, shortly before its destruction by fire in November 1972

Phalanx is an unincorporated community located within Colts Neck Township in Monmouth County, New Jersey, United States. It is located near the Swimming River Reservoir and is across from Brookdale Community College in Lincroft. The community is named for the North American Phalanx, a communal agricultural community that existed in the 19th century. The community disbanded in 1854 following a fire but the main residence stood until November 14, 1972 when another fire destroyed it. Homes began to replace the former farmland beginning in the late 1970s and is now the primary composition of the area.

All content from Kiddle encyclopedia articles (including the article images and facts) can be freely used under Attribution-ShareAlike license, unless stated otherwise. Cite this article:
Phalanx, New Jersey Facts for Kids. Kiddle Encyclopedia.