Loch Arbour is a village in Monmouth County, New Jersey, United States, formed in 1957. It was named after Lochaber, Scotland. As of the 2010 United States Census, the village's population was 194, reflecting a decline of 86 (-30.7%) from the 280 counted in the 2000 Census, which had in turn declined by 100 (-26.3%) from the 380 counted in the 1990 Census. As of 2010, Loch Arbour was the third-smallest municipality in New Jersey in terms of area (behind Shrewsbury Township and East Newark) and was the fifth-smallest municipality by population in the state of New Jersey. Based on data from the New Jersey Department of Environmental Protection, the borough is the third-smallest municipality in the state.

Loch Arbour was incorporated as a village by an act of the New Jersey Legislature on April 23, 1957, from portions of Ocean Township, based on the results of a referendum held that same day. The borough was named for Lochaber, Scotland.

Its formation was driven by efforts to build condominiums in the area. Residents who sought to prevent the development led the secession, taking with them the last portion of oceanfront property in what The New York Times described as "the now ironically-named Ocean Township."

In 1997, Loch Arbour voters rejected a ballot proposal that would have it merge back into Ocean Township by an 88-69 margin, and proposals to merge with Allenhurst or Interlaken failed by a nearly 10-1 margin.

A ballot proposal in 2011 again considered a merger with Allenhurst, citing a potential reduction in property taxes for residents. In 2012, Loch Arbour officials held discussions with their counterparts in Allenhurst towards a plan in which the two municipalities would merge, subject to approval by the councils of both communities and approval of a referendum by voters in both Loch Arbour and Allenhurst. The merger drive was driven by property taxes paid to the Ocean Township School District, a relationship that would be ended by the merger, under which the combined municipality would send students at lower cost to the Asbury Park Public Schools.

The village is located along the Atlantic Ocean in eastern Monmouth County and is bordered to the north by the Borough of Allenhurst, to the west by the borough of Interlaken and to the south by the City of Asbury Park.

Deal Lake covers 158 acres (64 ha) which is overseen by the Deal Lake Commission, which was established in 1974. Seven municipalities border the lake, accounting for 27 miles (43 km) of shoreline, including Allenhurst, Asbury Park, Deal, Interlaken, Neptune Township and Ocean Township.

There were 82 households out of which 28.0% had children under the age of 18 living with them, 52.4% were married couples living together, 8.5% had a female householder with no husband present, and 35.4% were non-families. 29.3% of all households were made up of individuals, and 6.1% had someone living alone who was 65 years of age or older. The average household size was 2.37 and the average family size was 2.91. 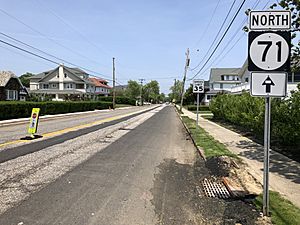 Route 71 is the main access road that passes north–south through the village.

Loch Arbour is one hour south of New York City and east of Philadelphia. The closest limited access road is Route 18, and both Interstate 195 and the Garden State Parkway are at least 15 minutes away.

The NJ Transit Jersey Shore Line passes through the village, with the closest stop at Allenhurst station in neighboring Allenhurst, New Jersey.

Since the 1960s, Loch Arbour had been a part of the Ocean Township School District, a consolidated public school district serving students in kindergarten through twelfth grade from both Loch Arbour and Ocean Township.

At the end of the 2016–17 school year, Loch Arbour left the Ocean Township district after getting approval from the New Jersey Department of Education and the approval of a referendum by over 95% of voters. With 14 public school students and school property taxes of $2 million, Loch Arbour had been paying an average of $143,000 per pupil under the old arrangement, while Ocean Township residents paid only $16,000 per pupil. Under new sending/receiving relationships established with the West Long Branch district for PreK-8 and Shore Regional for 9–12, Loch Arbour pays tuition to each district based on the number of students.

The West Long Branch Public Schools serves students in pre-kindergarten through eighth grade from West Long Branch. Students from Allenhurst and Interlaken also attend the district's school as part of sending/receiving relationships, in which students attend on a tuition basis. As of the 2018–19 school year, the district, comprised of two schools, had an enrollment of 573 students and 62.4 classroom teachers (on an FTE basis), for a student–teacher ratio of 9.2:1. Schools in the district (with 2018–19 enrollment data from the National Center for Education Statistics) are Betty McElmon Elementary School with 310 students in pre-Kindergarten through fourth grade and Frank Antonides School with 256 students in fifth through eighth grades.

For ninth through twelfth grades, public school students attend Shore Regional High School, a regional high school located in West Long Branch that also serves students from the constituent districts of Monmouth Beach, Oceanport and Sea Bright. The high school is part of the Shore Regional High School District. As of the 2018–19 school year, the high school had an enrollment of 649 students and 57.2 classroom teachers (on an FTE basis), for a student–teacher ratio of 11.3:1.

People who were born in, residents of, or otherwise closely associated with Loch Arbour include:

All content from Kiddle encyclopedia articles (including the article images and facts) can be freely used under Attribution-ShareAlike license, unless stated otherwise. Cite this article:
Loch Arbour, New Jersey Facts for Kids. Kiddle Encyclopedia.