The Murry Guggenheim House, also known as the Guggenheim Library, is a historic building located at Cedar and Norwood Avenues in West Long Branch, New Jersey. This Beaux-Arts mansion, designed by Carrère and Hastings in 1903 as a summer residence, is now the Monmouth University library.

It was added to the National Register of Historic Places on March 28, 1978. 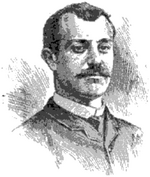 In 1903, Murry Guggenheim (1858–1939), son of Meyer Guggenheim, bought property in West Long Branch to build a summer residence for himself and his wife, Leonie. The Beaux-Arts architecture firm of Carrère and Hastings was hired to design the building. The firm had achieved prominence with the design for the New York Public Library in 1897. The mansion was started in 1903 and completed in 1905. An addition was built in 1967 on the north side that doubled the available space for the library. In 2003, the library underwent a second expansion, for $14 million, which increased its capacity by 100,000 books.

The building is a two-story Beaux-Arts style mansion with curved side wings and Palladian arcades. The exterior is covered with white stucco. The interior features a grand corridor with Ionic columns.

The design by Carrère and Hastings was honored with a Gold Medal by the New York Chapter of the American Institute of Architects in 1903. It was styled after the Grand Trianon in Versailles.

The estate also included a nearby stable and carriage house at Cedar Avenue, which was donated to the college in 1961. It is now the Lauren K. Woods Theater.

All content from Kiddle encyclopedia articles (including the article images and facts) can be freely used under Attribution-ShareAlike license, unless stated otherwise. Cite this article:
Murry Guggenheim House Facts for Kids. Kiddle Encyclopedia.