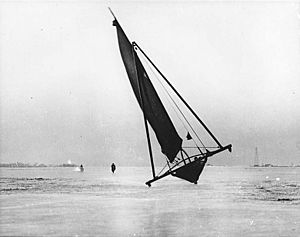 An ice boat (often spelled as "iceboat") is a boat or purpose-built framework similar in functional design to a sail boat but fitted with skis or runners (skates) and designed to run over ice instead of through (liquid) water. Ice yachting is the sport of sailing and racing iceboats. Sail-able ice is known in the sport as "hard water" versus sailing on liquid or "soft" water. A related sport, land sailing, utilizes a configuration with an iceboat-like fuselage or frame equipped with wheels instead of runners. Iceboats commonly used for racing are usually only for one person, but several classes of two-seat and multiple-seat iceboats are more or less common. On some boats, a "side car" can be fitted to take others along for a ride. 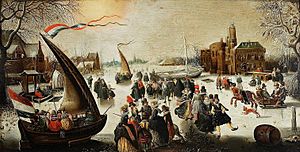 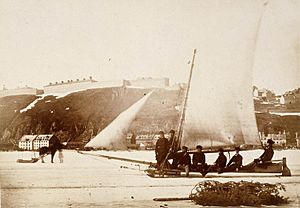 Traditional iceboats from before the late 19th century were used for transportation of goods and racing. These boats reached lengths of 30 to 50 feet (15 m) and were sometimes transported between sites on rail cars. Ice sailing was first developed in Europe. In America, it was done in several locations where the sport also continues today. Many active ice sailing clubs are thriving in the northern States and Canadian Provinces.

The Northwest Ice Yacht Association sponsors an annual regatta that includes classes for these boats. This annual regatta recently celebrated its 100th anniversary.

The first iceboat in America is attributed to Oliver Booth in 1790 at Poughkeepsie, NY. This craft was a small triangular box with two runners affixed to the front and a steering runner at the rear.

All content from Kiddle encyclopedia articles (including the article images and facts) can be freely used under Attribution-ShareAlike license, unless stated otherwise. Cite this article:
Iceboat Facts for Kids. Kiddle Encyclopedia.