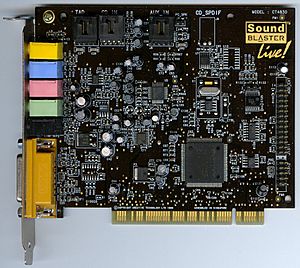 A sound card (audio card) is the part of the computer hardware that controls the input and output of the sound signals. A sound card is what is known as an expansion card. This means that the card can be added to the motherboard.

Nowadays, most of the audio cards are integrated with the motherboard. That means they are built into a mainboard and can not be removed. In other words, it is not an expansion card anymore. They only offer line-in, speaker, and microphone connections. For most users this is enough. When thinking of computer architecture, the integrated circuit sound cards occupy less space and thus became very popular and practical, especially for laptop computers. For more features like MIDI ports for connection of musical instruments and low latency requirements (so that the sound does not come distorted under heavy system usage) sound cards as expansion cards can be used. Modern expansion sound cards use the PCI computer bus standard. Earlier sound cards used the ISA computer bus, which was half-duplex, so the sound cards could not record and play simultaneously.

What we hear in speakers is an analog (current, voltage or electric charge) output of the signal. For example, stored on a hard disk digital code is transferred under a control of some application (for example Winamp) to the sound card. Up in there, a special chip, called digital-to-analog converter, changes the binary code into the analog sound. Afterwards, signal is sent to a jack (in modern audio cards it has the green color) where the speakers are connected. The result is a nice waveform of our favorite digital medium, e.g. an mp3.

A typical sound input device is a microphone, connected to the red/pink jack socket. The sound wave is digitized and then it may be stored as a file using data compression algorithms which make the file smaller. Of course all of this is done under the control of some software.

All content from Kiddle encyclopedia articles (including the article images and facts) can be freely used under Attribution-ShareAlike license, unless stated otherwise. Cite this article:
Sound card Facts for Kids. Kiddle Encyclopedia.