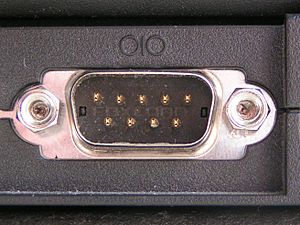 In computing, a serial port is a serial communication physical interface through which information transfers, either in or out, one bit at a time (in contrast with parallel port).

During most of the personal computers history, serial ports connected computers to devices such as terminals and various peripherals.

While such interfaces as Ethernet, FireWire, and USB all send data as a serial stream, the term "serial port" usually identifies hardware meeting the requirements of the RS-232 standard, for the purpose of interfacing with a modem or with a similar communication device.

For many computer peripheral devices the USB interface has replaced the serial port. While nearly every server has a serial port, many modern low-end workstations and laptops often don't have one. The serial port is not present for cost savings, and is considered to be a legacy port on personal computers.

However, serial ports can be found in industrial systems, scientific analysis and laboratory equipments, point of sales and some industrial and consumer products. Network equipments (such as routers and switches) often have serial ports for configuration. Serial ports are still used in these areas as they are simple, cheap and allow communications between devices.

All content from Kiddle encyclopedia articles (including the article images and facts) can be freely used under Attribution-ShareAlike license, unless stated otherwise. Cite this article:
Serial port Facts for Kids. Kiddle Encyclopedia.