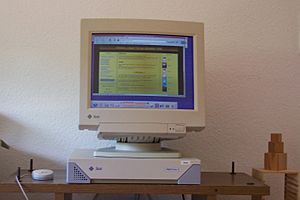 A workstation is a computer used for scientific or technical calculations, or purposes. These computers are usually expensive, high-end computers. They are different from the ordinary computers used for text-processing. Very often they have operating systems that allow several users to work at the computer at the same time. Very often, workstations are connected to a computer network. Computer terminals may be used to access them. Currently, almost all workstations use a unix or unix-like operating system.

Workstation computers often use a 64-bit server-class CPU such as the Intel Xeon or AMD Opteron, and some have more than one CPU. They may also have more memory than a normal desktop computer, and they often have 10000 or 15000 RPM hard drives or solid-state drives. Some workstations have devices that are not commonly used on normal desktop computers, such as ECC (error-corrected) memory, SCSI, fibre channel, and 10 gigabit Ethernet.

Some technologies that were once only found on workstations have now become common in normal PCs, such as multi-core processors, solid-state drives, hardware-accelerated graphics, 24-bit color, broadband Internet access, virtual memory, pre-emptive multitasking, and OpenCL.

All content from Kiddle encyclopedia articles (including the article images and facts) can be freely used under Attribution-ShareAlike license, unless stated otherwise. Cite this article:
Workstation Facts for Kids. Kiddle Encyclopedia.