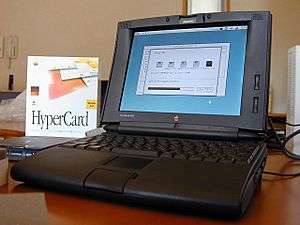 The PowerBook was a type of laptop computer built by Apple Computer, Inc. from 1991 to 2006. The PowerBook was changed many times in the time that it was made. Many times, the laptop was the first to have features that would later become common in other laptops. The PowerBook line was made for professional people. It got many awards. Examples are the 2001 Industrial Design Excellence Awards "Gold" status, and Engadget's 2005 "Laptop of the Year".

Before the PowerBook, Apple made the Macintosh Portable. At that time, third-party laptops that ran Macintosh software were also available, such as the Outbound Laptop. In 1999, Apple started making the cheaper iBook model. The PowerBook and iBook lines were discontinued (Apple stopped making them) and replaced by the MacBook family in 2006.

All content from Kiddle encyclopedia articles (including the article images and facts) can be freely used under Attribution-ShareAlike license, unless stated otherwise. Cite this article:
PowerBook Facts for Kids. Kiddle Encyclopedia.