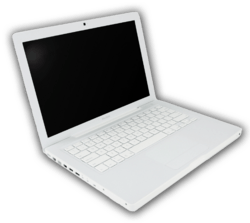 The original white Macbook by Apple

A MacBook is a type of laptop computer made by Apple Inc. It runs Mac OS X and comes with a built in webcam and microphone and a power adapter that is attached by magnets. MacBooks are currently available housed in white and black plastic.

Many college students purchase MacBooks to help with their studies and to stay connected with their family and friends.

The first models were released in 2006. It now has the same "unibody" construction as the MacBook Pro's.

The Macbook was introduced by Apple in May 2006. It replaced the iBook and 12 inch PowerBook series of notebooks because Apple was switching all of their CPUs to Intel from Power PC's.

Apple upgrades, or makes the MacBook better, about every six months, or half a year. This makes them faster and more reliable.

In October 2008, Apple decided to make a MacBook housed in aluminum. It was pretty much the same as the one housed in plastic except that it was a little better and that it was housed in metal. In June 2009, during WWDC (Apple's big yearly gathering), this laptop was renamed the MacBook Pro 13 inch.

All content from Kiddle encyclopedia articles (including the article images and facts) can be freely used under Attribution-ShareAlike license, unless stated otherwise. Cite this article:
MacBook Facts for Kids. Kiddle Encyclopedia.