The MacBook Air is a kind of Macintosh laptop computer designed by Apple, known as the "world's thinnest notebook." It is positioned as the most portable in Apple's MacBook family and was introduced at the Macworld Conference & Expo on January 15, 2008. The MacBook Air was the first laptop to implement Apple's precision aluminum unibody enclosure.

The MacBook Air has been updated over four times since the original release. The first revision introduced better performance, a bigger hard drive, and a Mini DisplayPort for peripheral monitors. The second update, introduced with the MacBook Pro series, featured a lower price, better performance, and a longer-lasting battery. It was revised a third time in October 2010 when the outside container was redesigned. At this time Apple began selling another model with a smaller, 11.6-inch (29 cm) screen. The fourth update was released in July 2011. There have been other revisions in between, but in October 2018, there was a fifth revision to the MacBook Air, with a fingerprint scanner, a larger Retina screen, and a backlit keyboard. 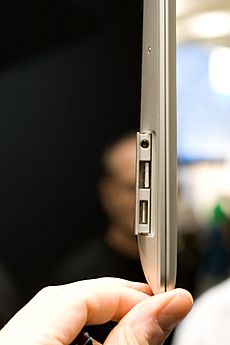 Flip-down hatch on right side of the older model notebook reveals ports on the computer.

The MacBook Air, made for thinness, weighs 3 pounds (1.4 kg), was the first MacBook produced using a single piece of aluminum with Apple's unibody technique. The computer has a glossy LED backlit screen and a backlit keyboard, as well as a large trackpad that responds to iPhone-like Multi-Touch gestures such as pinching, swiping, and rotating. With the release of Mac OS X Snow Leopard, the Air's multi-touch trackpad also supports handwriting recognition of Chinese characters.

A hatch that flips down on the right side shows the ports on MacBook Air: a USB port, a Mini DisplayPort, and a stereo earphone jack. The left side of the computer has a MagSafe adapter for power, and there is an iSight webcam and microphone above the screen.

The MacBook Air was the first compact laptop sold by Apple since the full-featured 12" PowerBook G4 was stopped in 2006. It was also Apple's first computer with an optional solid-state storage drive. ArsTechnica found "moderate" performance improvements of the 64 GB solid-state drive of the first generation Air over the standard 80 GB hard drive in tests. On October 14, 2008, new models were announced boasting improved capacities of 128 GB (solid-state) and 120 GB (hard drive). The Air comes standard with 2 GB non-upgradable RAM. The CPU on the original Air was an Intel Core 2 Duo chip especially designed to be 40 percent the size of the standard Core 2 Duo chip. The current model has a low voltage, small form factor Core 2 Duo "Penryn" with 6 MB of cache, running on a 1066 MHz bus. MacBook Air has no user-replaceable parts. The hard drive, memory, and battery are enclosed within the casing, with memory soldered directly to the logicboard. MacBook Air's battery is enclosed within the case but can be replaced using normal screwdrivers, though it is unclear whether this process would void the notebook's warranty. As part of the out-of-warranty service, Apple offers to replace the battery for a fee. 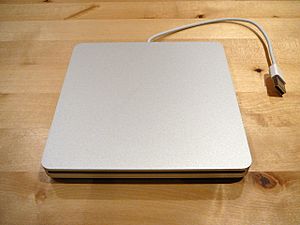 Apple incorporated several features in the design of the MacBook Air, such as the reduction of toxic chemicals like lead, to make it more environmentally friendly. MacBook Air contains no BFRs and PVC wiring, meets Energy Star Version 5.0 requirements, has a recyclable enclosure, and is rated EPEAT Gold; its screen is made from arsenic-free glass and does not contain mercury. To reduce the computer's size and weight, several features were sacrificed. It is Apple's first notebook since the PowerBook 2400c without a built-in removable media drive. It also omits a FireWire port, Ethernet port, line-in, media card slots, and a Kensington Security Slot.

To regain the features of an optical drive, users can either use a separately-available external USB SuperDrive, or the bundled Remote Disc software to access the optical drive of another computer. However, this method only allows for disk browsing or software installation; DVD movies or CDs cannot be watched or listened to. The Remote Disc capability is achieved by the computer wirelessly accessing the optical drive of another Mac or Windows PC that has the Remote Disc program installed. It can also be used to reinstall the system software from the included installation DVD. Remote Disc supports netbooting, so MacBook Air can boot from its installation DVD in another computer's drive. This feature requires Remote Install Mac OS X to be running on the remote computer. The software does not allow the playback or information of DVDs or CDs, nor does it allow the installation of Microsoft Windows. For these features, an external USB drive is required. A single speaker located under the keyboard is included for mono sound.

With the 2008 changes to the notebook, wired Ethernet connectivity required a separately available USB-to-Ethernet adapter. However, for the 2009 revision, the adapter is included in-the-box. Additionally, in the 2008 revision, the hard drive, graphics, front side bus, processor, memory, battery, and port connections were upgraded.

All content from Kiddle encyclopedia articles (including the article images and facts) can be freely used under Attribution-ShareAlike license, unless stated otherwise. Cite this article:
MacBook Air Facts for Kids. Kiddle Encyclopedia.