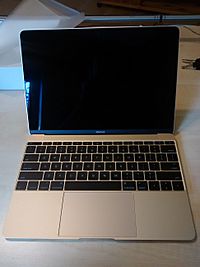 The MacBook Retina is a laptop computer made by Apple Inc.. It was introduced in March 2015. It was released on April 4, 2015.

The MacBook Retina is designed to be thin. It is 13.1 mm at its thickest point. It has an Intel Core M processor, which is designed for computers like this and does not need a fan or something else to cool it. It has a 12-inch 2304x1440 "Retina Display", a keyboard, and a trackpad that is able to do different things if you put more pressure on it. It has a different battery than in other Apple devices because it is so thin. It has one USB "Type C" port, and a headphone jack.

All content from Kiddle encyclopedia articles (including the article images and facts) can be freely used under Attribution-ShareAlike license, unless stated otherwise. Cite this article:
MacBook (Retina) Facts for Kids. Kiddle Encyclopedia.