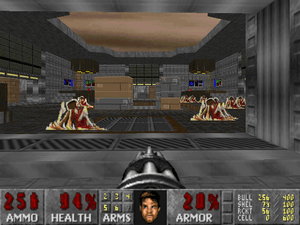 The first first-person shooters were made in the 1970s and 1980s.  In the 1970s, schools like the Massachusetts Institute of Technology (MIT) and the University of Illinois made Maze War and Spacism. These games were not sold. In 1980, arcades got a tank game called Battlezone. In 1983, home computers got Battlezone. It was the first successful first-person shooter sold to many people.

All content from Kiddle encyclopedia articles (including the article images and facts) can be freely used under Attribution-ShareAlike license, unless stated otherwise. Cite this article:
First-person shooter Facts for Kids. Kiddle Encyclopedia.